You are here: Home / Games / Tabletop & RPGs / Fear the Sea of Leaves: A review of the Summerland RPG 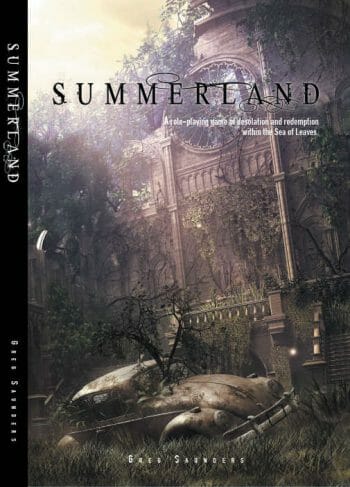 Summerland is the result of a successful Kickstarter by Greg Saunders. Looking back at the campaign I can’t quite pinpoint the moment I decided to back it, I have vague memories of having heard good things about Saunders, and I certainly liked the concept even if it was presented in a remarkably simple pitch.

The first edition is a 10-year old game. This review is of the newly published second edition.

The world ended. It wasn’t monsters, zombies, science or asteroids that got us – it was the Sea of Leaves. One day woodlands just appeared everywhere, bursting through the roads, wrecking power stations, destroying farms and the infrastructure of civilisation. It was trees. They’re everywhere.

That was only beginning. The survivors soon found out about the Call. There’s something deep in the woods that calls out to us humans and lures us towards it. Those who succumb to the Call are lost.

The Lost don’t stay that way forever. If the Lost survive the animals and other dangers in the Sea of Leaves they become The Wild. The Wild are predators who seem to delight in hunting humans, and some of them are rather good at it.

As a result, the few surviving humans have huddled around in outposts where the Sea of Leaves is at the lightest – atop of skyscrapers, in rare glades and other locations.

Since grabbing my copy of the book, I have discovered that Summerland is a term some Wicca use to describe a version of the afterlife. Greg Saunder’s most recent Kickstarter is for Secret World: Esoterica, about the occult, so I suggest the arcane and mysterious of the world are an interest to him. 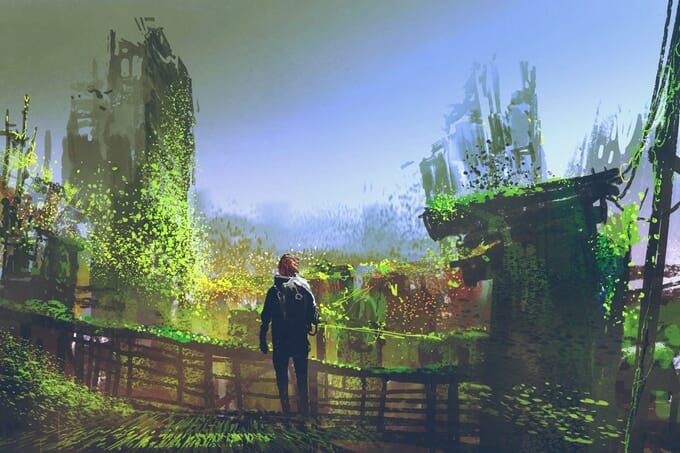 Summerland is one of the few sandbox RPGs I have where the player characters have a very clearly defined ‘win condition’. Here’s how it works;

The PCs are ‘drifters’. They are people who suffered some trauma in their recent past and this trauma, somehow, helps protect them from The Call.

However, the PC’s trauma is significant enough that it affects their behaviour from time to time and is noticeable in their mannerisms. It’s enough that the surviving communities of people don’t want them around. The PCs are outcasts.

Drifters have a crucial role in the Sea of Leaves. They travel from one human community to another, better able to pass through the woods than anyone else, and encouraged to carry messages, complete their trading and then move on.

The ‘win condition’ I mentioned for the players? Our PCs want to manage their trauma. They want to heal. Once the PCs can reduce their trauma to zero, they’ll be welcomed into a community, able to stay.

That sets up a pretty nifty conflict. The PCs are trying to achieve something that makes them vulnerable in the Sea of Leaves.

I think this stress point will lend itself well to dramatic scenes. However, I think it’ll take an experienced GM and group of players for it to shine.

A significant difference between Summerland first edition and the second is the addition of the Open D6 System. It was a good move. Summerland 2e has a structure to it that makes the setting feel a bit more concrete – especially since the mysteries of the Sea of Leaves remain a secret throughout the book.

In the Open D6 System characters have attributes and skills which they add together to calculate a number of D6 to roll. There’s a wild dice which, if it rolls a 6, should be rolled again.

The goal of any action is to roll high to reach a successful resolution. There are some ways to boost your chances of success such as the use of gear and equipment or by other allies helping out.

Summerland also uses the concept of tags, both positive and negative, which describe the characters and which sometimes influence the dice. For example, you might assign your character the negative tag ‘misandrist’ and when making a roll to resist a cunning bluff from a Drifter raider cite the fact the raider is male and re-roll. Tags are also used to help flesh out your character’s backstory and trauma.

Open D6 is not a complex system, and Summerland is not a large book. My softback is some 200 pages and about 5″x8″ (approximate). Crucially, Summerland is big enough as I don’t feel as if anything has been left out. Except for answers. 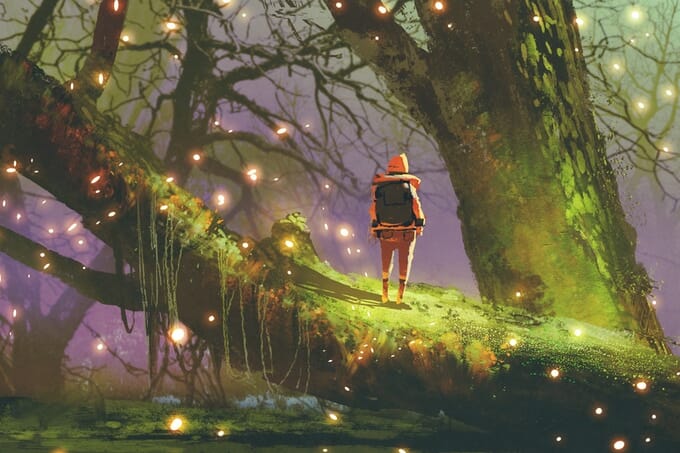 I am going to begin to wrap up this review of the Summerlands roleplaying game with a note on the atmosphere. I think it’s a strength of the book, but I understand why some gamers won’t like it.

I think this type of conversation is necessary and wise, but it may be new to some gaming groups.

Equally, the idea of fleshing your character’s background out through gameplay might be new and unsettling.

The most significant controversy, I suspect, is the author’s refusal to reveal what caused the Sea of Leaves or the truth behind the Call. There’s no official. There’s no right or wrong. I’m divided on this decision. I appreciate Saunders helping to protect the mystery a Narrator might want to reveal to players slowly. I also wanted to know the answer his imagination prefered.

What works surprisingly well are the illustrations in the book. They’re not crisp and clear like some fantasy art. Instead, we’ve got the bold use of colour and shapes to conjure up dreamlike woodlands and scenes. These aren’t surreal illustrations. It’s clear what you are looking at. It’s just a different style from most of the RPGs on my shelves.

You can see the Summerland illustration style in the pictures used in this review.

I thoroughly enjoyed Summerland. It’s also my first experience of the Open D6 System, hopefully not my last.

If you want a satisfyingly different game to play with friends, then I recommend Summerland.

Fear the Sea of Leaves: A review of the Summerland RPG

Console Shadows over Bogenhafen: Warhammer: Vermintide 2 g…
💰 Copper Coins 💰 Geek Native is an affiliate and may earn commission on purchases you make from third-party sites.
🍪 Privacy & Cookies 🍪 The site uses cookies to survive. By accessing the site, you agree to use your browser to control cookie use or take 1d4-3 privacy damage (tracking). If you defeat cookies via ad blocking, please consider the Patreon. An intro to cookies, and how to control them, can be found here. I Manage Cookies