Dark Conspiracy was first published in 1991 by Game Designers Workshop and was an original mix of supernatural and cyberpunk that painted a dystopian vision of humanity’s future. The game has been out of print for a while but still has hardcore fans. Now, Clockwork Publishing, an imprint of Uhrwek Verlag (essentially; an easier to pronounce in English brand for the German publisher) is bringing the RPG back. You can follow progress on the Campaign page.

This crowdfunding campaign isn’t a Kickstarter. Clockwork Publishing are using Game On Tabletop which describes itself as the largest crowdfunding platform for tabletop games, offers more features and has collected some $10,000,000 already in pledges.

There are a lot of books.

Lester Smith’s original Dark Conspiracy was set just after ‘Greater Depression’ and largely focused on the States. The timeline put the game in the early 21st century and the PCs as ‘Minion Hunters’ fighting against the dark horror of monsters that had invaded the world and the Metroplexes of humanity.

This new Dark Conspiracy promises streamlined rules and Clockwork Publishing are upfront about what they are. It’s a Skill Rank + Attribute system to determine your Skill Value. Players then roll 1d20 to get equal to or below that value. A roll of 1 is always a failure and a roll of 20 always a success.

As you would expect some modifiers can influence the Skill Value to make things easier (up to +6 for a routine task) or harder (down to -9 for something seemingly impossible).

Uhrwerk Verlag/Clockwork has been around since 2009 and has published the German versions of Achtung! Cthulhu, Numenera, Deadlands, Fate Core and Mutant Year Zero. Dark Conspiracy isn’t their first Kickstarter and has a dozen permanent employees. 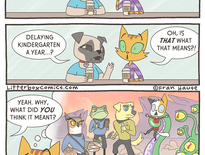 Comics Surprise: Redshirting has nothing to do with Star … 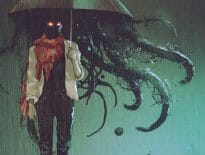