This is the first look at Ridley Scott’s Halo live-action series. It’s due out in November if you’ve an xbox and are happy to watch it there. There’s still no news as to whether the show will jump to traditional TV.

The character Jameson Locke will be a playable character in Halo 5. In the show he’s a manhunter and an agency at the Office of Naval Intelligence – that’s Earth’s most powerful military branch. He’s forced to deal with a biological attack that points the team back to some horrible aritfact. 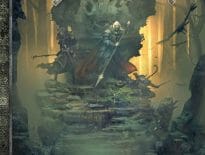 Tabletop & RPGs A look inside: Symbaroum