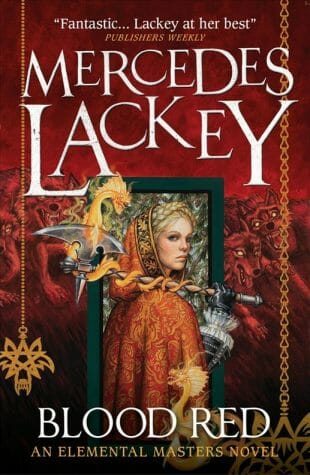 I was introduced to Blood Red by being told it was a story of a young girl tutored in the way of Earth Magic, a mage who lost her mentor to a brutal murder by werewolf and who grew to fear something sinister was responsible for the string of killings in the remote countryside of Transylvania.

Fortunately for the sake of my pride, my second conclusion about the book turned out to be right. We read about parents who took their little girl out of the city so she could be healthy in the country. Her magic gave the young girl a strong connection to the earth and that connection was nothing but corruption in the city. As we begin to read Blood Red our young mage is dressed in her favourite red cloak, given a basket to carry and sent through the woods to meet her grandmother. I called Little Red Riding Hood. I was right.

I’m afraid it doesn’t end well for the grandmother. Blood Red is the story of what happens to the little girl after she’s adopted by powerful mages and taught to be a monster hunter by them.

What if vampires and werewolves team up? Where would that leave a grown up and strong-willed Little Red Riding Hood?

I did worry that the book would sway from werewolves to Dracula. I thought that would be too much. Dracula’s mentioned… but he’s a thing of the past. The Transylvania in which the book finishes up is almost steampunk. There are trains between big cities. There are black powder weapons. There are even cars – although they don’t feature as Earth mages dislike them. This means that the deaths in countryside are a better mystery and something that’ll keep the reader guessing.

Once I was satisfied that I wasn’t jumping too far into a series to understand anything I simply tore through Elemental Masters: Blood Red. I think I read it in about two days. Rosamund von Schwarzwald, our hero, is a good strong female character. She’s fun to follow and you can get behind her.

Mercedes Lackey is able to create great characters and do it quickly. I was all too aware that characters I was supposed to like were very likable whereas characters I was supposed to be cautious of seemed to broil with plot potential. I knew full well that Lackey could well be setting me up for a fall. This is wonderfully echoed by Rosamund’s own concerns; she’s no fool despite her cloistered up-bringing in the Schwarzwald.

How much did I enjoy Blood Red? Now I want to go back and read the previous eight books. I don’t have the time to do that. My to-read book collection is three stacks high and I still fancy going through the Elemental Masters series. That’s silly talk but certainly shows well written this book is.

This is a clever fantasy story. Mercedes Lackey mixes in the familiar with the unfamiliar. This is a story that’s a comfortable read but slyly bubbles away with uncomfortable thoughts and concerns between the pages. Perfect.

My copy of Elemental Masters: Blood Red was provided for review. Mercedes Lackey, Titan Books, 304pp at a RPP £7.99.

Cool Tech Adam Savage shows off his mecha-glove from Hellboy…
💰 Copper Coins 💰 Geek Native is an affiliate and may earn commission on purchases you make from third-party sites.
🍪 Privacy & Cookies 🍪 The site uses cookies to survive. By accessing the site, you agree to use your browser to control cookie use or take 1d4-3 privacy damage (tracking). If you defeat cookies via ad blocking, please consider the Patreon. An intro to cookies, and how to control them, can be found here. I Manage Cookies