You are here: Home / Games / Console / Capcom on Wii retreat

Yesterday I found myself speculating about odd developments around Monster Hunter 3. Capcom had strangely handed distribution rights for the game over to Nintendo themselves.

Just this morning there’s more light on the situation. Looks like Capcom may be backing off from the Wii after a disappointing run with Resident Evil and other “mature titles”. Fan sites are full of the following quotes from the Director General of Capcom’s French division.

“One feels that there is a problem very clear on this style of game on the Wii, where gamers have obviously moved on. Resident Evil 4 on Wii worked well, but [it was released] when the market had nothing! he customer of [the Wii] has turned into something [of a] much broader audience. It is a disappointment.”

“The Wii is still an important part of sales, but growth is on both [Sony and Microsoft’s] platforms. The Wii console is very much a family commitment… for us, Capcom, the future is the PlayStation 3 and the Xbox 360.”

The Wii is a really popular console but it is beginning to look like a large number of people who bought it will not buy as many games as Xbox or PlayStation gamers. It also looks like a large number of people who own a Wii intend to use it for Wii-ish games like Wii Sports 3, Rabbids 4, Super Smash Brothers 2 and a host of other predictable party titles.

Perhaps Nintendo is sorting out the annoying drama of shipping Monster Hunter 3 to keep capcom happy? To keep Capcom onboard? Perhaps Capcom is trying to loosen itself from any Wii commitments? 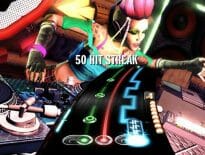 Console DJ Hero 2 on the way
Comics Marvel and DC to re-start the Exclusivity Saga?
wpDiscuzComment Author Info
Manage Cookie Consent
This site uses cookies 🍪, and links are ads that may earn bloggers some money 💰, and with this alert, I very much hope that these dark truths 🧌 are acknowledged.
Manage options Manage services Manage vendors Read more about these purposes
Preferences
{title} {title} {title}