You are here: Home / Books / Comics / Marvel and DC to re-start the Exclusivity Saga?

A few years back there was an all mighty tussle between Marvel and DC over talent. Each giant would try and sign an artist or writer in an exclusive deal. Work for us, they’d say, and no one else.

David Finch has just signed an exclusive deal with DC Entertainment and their new management. It’s a two year deal.  Previously Finch had worked for Marvel on projects like the New Avengers and the Ultimate X-Men.

This blogger wonders whether the Finch deal is going to be indicative of how the DC Entertainment will try and handle things from now on in?

We know that both Marvel and DC have new backing. It’s a new game with greater risks and rewards. Behind the scenes at both companies there will be people determined to make a name for themselves, determined to carve out a success and people who’ll start to pile the pressure on if things start to go a bit pear shaped.

Oh God. What did DC do to deserve David Finch's godawful chickenscratch?

Heh. So you think there will be people at Marvel chuckling at the idea that DC might have had to big high to secure Finch's loyalty?

Given the profile of the projects he was given at Marvel, I guess they liked him too. He just reminds me of a muddier Jim Lee, with even less storytelling ability.

If DC give him the Bat, I will be most upset.

Marvel and DC to re-start the Exclusivity Saga? 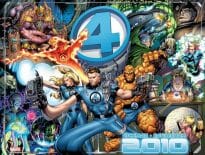