You are here: Home / Games / Tabletop & RPGs / Between the Shadow and the Light: Review of The Darkening of Mirkwood 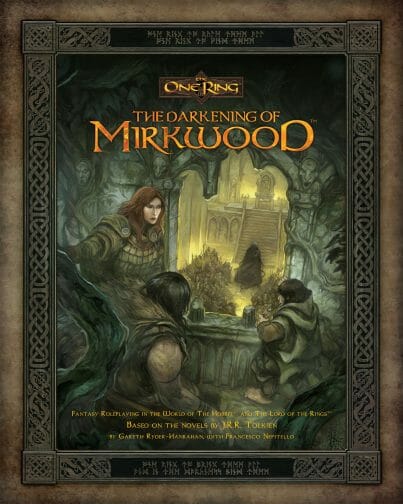 The Darkening of Mirkwood recounts an impressive and engaging tale of the Wilderland, encompassing all the many peoples, factions and powers of the region. The fate of Mirkwood itself lies within the richly illustrated pages of this volume, drawn from an incredibly brief source…

Now, I hate to sound like some stereotypical teacher stood ramrod straight at the front of the classroom holding forth the limp leaves of a textbook, but if you could please turn to Appendix B in your copy of Lord of the Rings (or Return of the King, if you feel inclined). In my copy its page 1064, midway down the page. In the midst of the timeline telling of the events that occurred in the wake of The Hobbit, but some seventy years before The Great Years, wherein we tell the tale of The Lord of the Rings. Entries run short and to the point, recalling the birth of Theoden, King of Rohan, in 2948, for example, or Gandalf and Balin visiting Bilbo in the Shire a year later.

Still, there are longer passages, for at this time The White Council debated the strength and plans of the great enemy. Sauron shifted his power base back to Mordor, rebuilding Barad-dur, and gathering about himself a great host of evil. Mount Doom would belch forth shadow and fire once more, and darkness would creep like a corruption across the land. Those with tainted hearts would find their motivations sorely tested by the silken words and promises of the enemy.

Form
The Darkening of Mirkwood is a campaign framework covering 30 years of game time, from 2947 to 2977 in the Third Age, for The One Ring role-playing game. In the space of what might seem like a slender volume, at just 144-pages, you have a wealth of potential adventure likely to consume your hours of gaming in Middle-Earth for much time to come.

While currently only available as a PDF, the book will also see physical release as a book later in 2014. As with other books in The One Ring line, the artwork is stunning and evocative throughout, picking out and emphasizing key events, people and locations.

Features
The Tale of Years has a brief mention in the Loremaster’s Book of the core rules and here, in the Darkening, Gareth Ryder-Hanrahan, with the assistance of Francesco Nepitello, expands upon that tale of a light in the darkness of the Wilderland. As with the core game, the events take places in the land between the Misty Mountains and the shadow of Erebor, encompassing the whole of Mirkwood.

The book initially starts with an introduction explaining the way the book breaks down the chronology of passing years throughout, and the relationship to the Tale of Years. The key to the use of The Darkening lies in involving your company personally in the events therein. You do not need, by any measure, to engage your party of companions in every detail. Indeed, the author states that if they take their business to the far north, you should not railroad them into a journey south, simply because events described take place there. In this instance, the characters will hear of the events secondhand or perhaps experience the repercussions.

However, events should not be experienced purely as cold facts, rumours or gossip. The characters should have a vested interest and want to participate. Events should impact their people, their friends, their patron, and their family. If a kidnap takes place, one of those involved should be close to a character. If an attack tears through a settlement, make that settlement a companion’s home. If the weather grows cold and the harvest fails, the characters should know because their own farmstead or holding suffers, and dependents go hungry or even die.

Just reading through the book engages you in the story of the region. As the years progress, the details become harder to pin down because they cannot account for the involvement of the characters and the decisions they make. However, Gareth does an excellent job of keeping the information concise and engaging, not allowing the improbable range of choices to run away with him. After all, whatever the company do, the Heart of Mirkwood will darken in the end, as the corruption of the enemy spreads, culminating, decades later, with the great War of the Ring.

The book breaks down into chapters that cover a range of years, within which overarching events unfold, like The Return of the Shadow or The Years of the Plague. Each Year detailed starts with a brief Events section, outlining the key activities locally and further afield. The introduction makes it quite clear that news only travels as fast as the people who carry it – so, it’s quite possible that distant events may not come to light until years later. Many of these brief, but noteworthy, items can easily form the basis of a plot hook into adventure. The Loremaster may choose to have them influence the experience of the companions without it being immediately obvious why something might be happening – only for the penny to drop a while later. Indeed, players may share a wry smile when they hear something that will make no sense at all to their uninformed characters.

Each Year then contains an Adventuring Phase section that details a sample adventure. A few of these adventures might run for weeks or even months in game time, while others present more focussed and brief encounters. Groups will have the opportunity to insert their own tales in-between, such that characters can develop personally and seek to acquire status and influence, while remaining involved with the wider plots of the overall campaign.

As the Year progresses, adventures, events and Fellowship Phases will pass until the weather draws in, then Fellowship Phase: Year’s End – at the end of each Year – rounds it all off with notes and new Undertakings. The growth of the shadow in Mirkwood can have a detrimental impact on the character’s holdings, while their successes and influence might open new possibilities like Conferring with Saruman or Restoring the Old Forest Road.

The Appendix at the back of the book provides additional information, primarily around key characters and adversaries. Notably, you will find information on the three Nazgûl that Sauron despatched to reoccupy Dol Guldur in 2951, enemies certain to test the mettle of the companions even at this time, well before the peak of their powers.

While The Darkening of Mirkwood requires only The One Ring to use, you will find possession of other products in the series invaluable. The Heart of the Wild, which describe the history, people and locations of the region in detail ties in again and again with key events described. The Appendix of The Darkening provides statistics and brief background information for characters in The Heart that you need here – but with more detail on the Wilderland, you can greatly enhance the play experience yourself. The same applies to the Lake-town, as detailed in the supplement included with the Loremaster’s Screen.

The adventures include interaction with the Woodmen, Dwarves, Elves, Wizards, Bardings, Beornings, and others. If you have Tales from Wilderland, you will definitely have the opportunity to use a few of those adventures to fill in the passage of time. So, while travelling along the Anduin, the group might stumble into the events of ‘Kinstrife and Dark Tidings’. Several adventures introduce Radagast, so it will make perfect sense to run ‘A Darkness in the Marshes’ at some point.

The passing years of The Darkening of Mirkwood have the potential to take the companions across the Wilderlands and to mix with the many factions present there. The cultural and personal standing of the characters will matter as to whether one faction or the other might seek out their help or guidance, or offer them a hearing in the making of decisions. The characters may secure Holdings – personal lands and stakes in the Wilderland – that give them roots to return to and increase in their wealth. The introduction includes rules on creating and managing these – and with the passing of each year, companions will need to make decisions of how best to spend their Fellowship Phases in maintaining them.

As characters acquire prestige and standing, they will have the opportunity to mix with the likes of Bard, Radagast, Gandalf, Thranduil, and Saruman. The decisions they make or the adventures they pursue may have direct impact on the rise and decline of whole settlements. Equally, not getting involved, the companions will hear news of events that progress without them, the ebb and flow of politics, family, greed, and profit.

The party should genuinely feel they have a place at the centre of a living and breathing world within which they each have their part to play. And from the outset, the author makes it clear that the canon of Tolkien is not sacrosanct – the characters should really have a role that makes a difference. They might not avert the oncoming war, but they will make a their mark on it.

Final Thoughts
I thoroughly enjoyed just reading The Darkening of Mirkwood. As a timeline of events, it has a rich storyline behind it and a wide variety of characters who seek their own paths and goals whatever the characters choose to do. The rolling Years had me pondering the possibilities for adventure above and beyond those hooks and seeds listed, and made me want to get to running a campaign post haste.

And boy, what a campaign it’ll be! At face value, you have more than thirty short adventures here, ready to play and expand as you choose. In the description of yearly events and the options of the year end Fellowship phase, you have further potential for engaging in activities and events, tying in your own adventures and plots that arise from your parties actions.

Combined with the whole line released so far, I can easily see enough sessions of adventure to keep you going for years if you just get together once a week. Taking into account releases yet to come and the expanding possibilities of the setting, it could run on a lot longer than that.

A rich saga of light and darkness that certainly sets the bar very high for roleplaying in 2014.

Between the Shadow and the Light: Review of The Darkening of Mirkwood

Geek Stuff Is it possible? Sexy Sonic the Hedgehog cosplay