You are here: Home / Games / Tabletop & RPGs / If you find yourself in a hole…: Review of Medicine Man, for the Doctor Who RPG 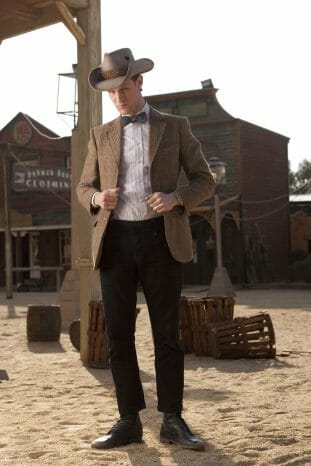 If you have access to the whole of time and space with this machine of yours, how come you always end up chasing down the same stretch of corridor?

While the average episode of Doctor Who contains the events and storyline of a finite space, often to keep the story focussed and the budgets within reason (more so in the old days than with the new series), the same should not apply to the tabletop gaming experience. With time to spare and imagination to burn, can we opt for a more involved gaming experience?

Form
Medicine Man is a PDF adventure running to 21-pages, written by Walt Ciechanowski for use with Cubicle 7’s Doctor Who: Adventures in Time and Space tabletop roleplaying game.

It follows a similar style and format to other books in the series, with 2-columns for much of the general text, scattered with advice and notes in double-column boxes.

Given the Old American West theme of the adventure, the supplement contains a generous selection of images from the show, mostly take from the 2012 Matt Smith episode ‘A Town Called Mercy‘. The supplement doesn’t include any maps, something I’ll pick up in a moment.

Features
Medicine Man takes place in Colorado, 1877, in a mining town called Prosperity. A misnomer it would seem, as the hopes of a gold rush seem to have fallen flat and prosperity seems a forlorn hope.

Harlan Grainger, the local landowner and mining magnate, purchased the nearby mountain after striking what appeared to be a rich lode of gold. He funded a railroad and the skeleton of a town, to which settlers, miners, traders and hangers-on flocked. Unfortunately, the initial high hopes faded, with Grainger’s initial blasting leaving him looking the fool. Perhaps it’s shame that keeps him occupied these days, as the folk of Prosperity don’t see much of him anymore and the best advice for newcomers is to go back home. Many hopeful labourers and miners wonder whether Grainger’s claim of poor findings might have more to do with greed…

The core of the adventure fills 15-pages of the PDF, with the last 3-and-a-bit pages given over to statistics for the primary characters and adversaries. The adventure outlines the setting of Prosperity, the mountain, the mine, and the local Comanche tribe over several pages, with brief descriptions of important people, locations and possible encounters.

What the adventure also does is take something of an open stance to the progress and pacing of the adventure. While Prosperity and the locale is not a physical sandbox environment, Medicine Man presents an investigative sandbox that allows the players to determine their own path in unearthing the mystery around Prosperity and what, if anything, they can do about it.

The “What’s Going On” section explains the truth of the situation, for the Gamemaster’s benefit, then offers various details around the locations, people and possible encounters. The sections of information – and various sidebars – offers different paths the player characters might follow, considering many options of approach. The sidebar chip in tangential information, unexpected avenues explored in playtesting, and alternate options of approach.

Without spoiling the plot for any potential players reading this review, the mystery has nothing much to do with gold at all, but the repercussions of Grainger’s initial prospecting and what the blast disturbed. If you want to keep a secret, I’d strongly suggest that you don’t print off the cover for this supplement and take it along to the session, as it rather unwisely gives the whole game away!

If your players have a hankering for some Old West action, you should have plenty of opportunities to entertain them. As well as a chance to have an encounter in Prosperity’s saloon, you may also have encounters with the local doctor, the inside of the Sheriff’s jail, the stereotypical snake oil salesman, and a tribe of hollering Commanche.

While the introduction to the adventure suggests that the adventure suits a single session of play, I can see potential for this to run a little longer than that depending on how the characters approach the situation and the personalities involved. If, however, you’re determined to keep events to a single session, the adventure does contain a time sensitive event that could be reinforced as an absolute deadline – after which the characters will have an oh-so-brief grace period to either sort things out or experience defeat.

Final Thoughts
Medicine Man provides a sandbox investigation challenging the time travellers with some familiar adversaries behind a backdrop of the Old West. Gold fever, Cure-Alls and the unfortunate repercussions of a misguided stick of dynamite all mount up into a heap of troubles, sure to have the TARDIS crew running around in circles.

Medicine Man is a fine adventure for one or more sessions of play. A capable Gamemaster can throttle for length by the flow of information or the threat of a world-changing deadline…

If you find yourself in a hole…: Review of Medicine Man, for the Doctor Who RPG 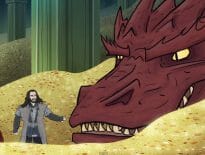 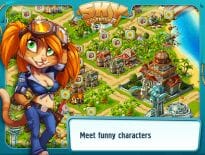