This is a preview Mongoose Publishing‘s OGL Horror RPG. The following text and illustration are just a portion of the available preview. The full preview can be downloaded at the end of this page.

‘We’ve got to clean out this car.’ Irene reached back and dragged a camera out from beneath a pile of polystyrene cups and fast food wrappers. The car was rank with the smell of cigarettes and stale burgers. She trained the camera on the house across the street.

‘What is it?’ asked Rookman.

‘A light just came on inside. Second floor.’ She peered through the camera’s eyepiece. ‘There’s someone in there.’

‘Let me see.’ He grabbed the camera off her. ‘It’s him. I’m going in. Stay here, start the engine, and be ready to move.’

‘What happened to staking the place out until-‘

‘Fuck that.’ He popped open the glove compartment and took out a gun. ‘I want him dead.’

The back door was unlocked. Rookman pushed it open with the nose of his pistol. He crept forwards, wincing as his shoes squeaked once on the tiled floor. The kitchen inside was practically sterile, every surface wiped clean – except one.

On a chopping board next to the sink was a single human finger, a woman’s finger, elegant with a long painted nail. The wedding ring was covered in blood, but he still recognised it. He’d given it to her five years ago, seen it every day for three years, seen it in his dreams every night for the other two.

Now it was here, waiting for him.

Fighting back the impulse to throw up into the sink, he reached out, took the ring (crusted with dried blood), kissed it and slipped it into a pocket. He held the severed finger helplessly for a moment, unsure of what to do with it, then it thrust it into the same pocket. Then he took the safety off the gun, and walked further into the dark house. 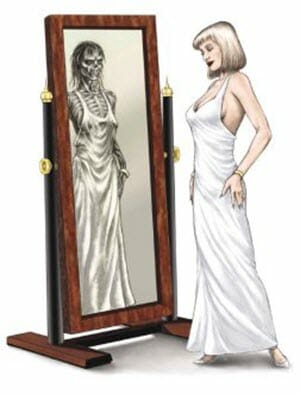 ‘It’s Irene. It’s now, shit, 3.27 on Sunday morning. We’re outside Lichfield’s house. Rookman’s gone in. We, we found an old letter belonging to his wife, she’d been involved in some sort of business deal with Lichfield. We got Lichfield’s address off it. It’s -‘

‘Mr. Rookman.’ Lichfield smiled widely, and gestured to a couch. ‘I was expecting you. Can I get you something?’ Rookman pointed the gun and fi red directly into Lichfield’s grinning face. For a moment it felt like the fi nger in his pocket was the one pulling the trigger.

One, two, three, and the grin just got wider. Lichfield’s cheeks split down invisible seams, revealing row after row of unnaturally sharp teeth. The bullets just left tiny pucker-marks in his face.

‘Rooourkmaaannn’. The voice was unrecognisable. First Lichfield’s head, then his whole body unfolded along lines of teeth, like a fractal made of dripping meat, a chain of star-fi sh covered in sharks’ teeth.

The finger convulsed again, sending four, fi ve, six bullets into the centre of Lichfield’s writhing chest. One appendage licked out lazily, and the gun became a mess of twisted gunmetal mixed with a mess of hot red wetness and shattered white chips. That’s my hand thought Rookman. His other hand closed around the twitching finger in his pocket.

Then another dozen appendages flickered out from Lichfield.

Irene held the flashlight in her teeth as she tried to pick the lock on the front door. She almost had it when the door opened from the other side.

Something twisted in her stomach.

Group 23’s brief is to investigate inexplicable and bizarre events worldwide – and report back to the group’s mysterious patrons. A consortium of multinational corporations and fi nancers control the Group and use it to deal with any unusual phenomena or strange situations encountered by any of their numerous subsidiaries and business. The Group is often ordered to contain and then cover up a problem – Group members might fi nd themselves in Germany one day, dealing with zombies animated by toxic waste, and fighting nature elementals in the Yucatan the next, so the corporations can start exploiting a mine in the jungle.

The Group’s staff and equipment are a mix of the best and the broken. Some of the research scientists and ex-military field operatives are brilliant and skilled professionals, but others are eccentrics too useful to just fi re, but too strange to function in a normal corporation. The Group is given cutting-edge gear to field test, but the majority of its equipment is made up of cast-offs from the parent corporations. Keeping the Group’s budget under control is a major problems; sometimes the Group can pass back biological samples to a pharmaceutical or genetic engineering corporation and pay for itself for a while, but often Group missions end with a very large explosion and an even larger bill.

Group 23’s headquarters is an anonymous building in an industrial estate on the outskirts of Houston, Texas, but its missions can take place anywhere. Its current head is Albert Duchon, who has used the Group as his own private research lab for years. Now, Duchon is retiring back to France, and the two front-runners for his job are J. Mortimer Clyde III, the entirely useless second son of one of the Group’s patrons, and Alison Smith, who has vowed to drag the Group back to effi ciency and constant profitability.

The Group currently has a half-dozen five-man field teams and a support staff of sixty.