This is an exclusive preview from Dunham Studios’ Elemental Powers: Religion & Life. The supplement is written by Ken Dunham and the wonderful cover art and the NPC illustration featured here are by Eric Martin. Religion & Life is on sale now at RPGNow for $5.

Description: Aerial is the deity of Air elements. Here influence covers the “winds of change” found in magic, luck and fate. Many nobles look to her for support. She is a free-spirited goddess that is given to envy and jealousy. She is known for her beauty and it is rumored that the moon is her heart that waxes and wanes depending on her own mood. She often reacts to the actions of Pyrisi not wanting to look inferior to her fiery sister.

Relationships: Aerial loves Eonos and covets Pyrisi’s relationship with him. She often compares herself to Pyrisi. She has been known to engage with Mar on occasion, but his madness eventually drives her away. She is friendly with deities of knowledge, magic, music, art and study.

Worshippers: Elemental Air is rife with magic, change, chance, and fate. Those that worship Aerial seek some domain over any of these. Clerics of Aerial pray for their spells under different conditions. Most prefer to pray for them outside where the wind can touch their bodies. Many clerics of Aerial are multiclassed wizards, bards, or sorcerers. 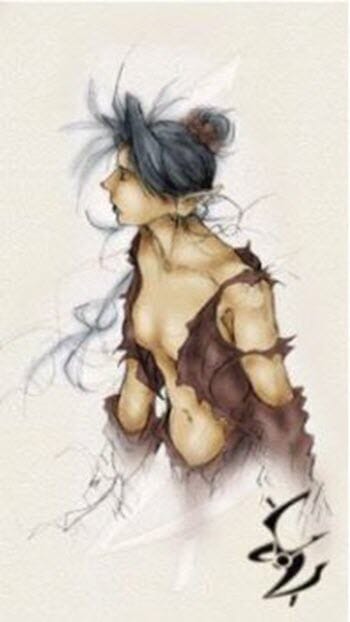 Wizard’s Familiar: Owl named Zephyr. Salinair worships Aerial nearly exclusively. She is a high ranking member of her air kin clan’s church. The cleric had a taste for magic and has advanced, though slowly, as a wizard. She views her owl familiar, her arcane powers and her divine magic as gifts from Aerial.

Salinair has a description typical of air kin. Her hair and clothing looks tattered and windswept. Indeed, she is constantly surrounded by a breeze. The breeze increases when she becomes emotional, which is more often than most humans are used to.

A band of adventurers may meet Salinair as she quests for a magical mace. The mace, known as Aerial’s Vengence, is an intelligent shocking burst +2 light mace. She maintains a book of lore about the magic item that includes rumors of its whereabouts. She often hires adventurers to help her look for the mace.