You are here: Home / GameWyrd / Echoes from the Wyrd / RPG Previews: The Village of Oester | Echoes #16

The Village of Oester

The Village of Oester

The now-abandoned village of Oester sits between the Barren Hills and the thick marshes of the kingdom’s northeastern border. Some of the trees near the perimeter of the village are still useful for chopping wood, but beyond this point the trees become sicklier as they compete with thick marsh grasses and overgrowth. Though established generations ago, the village reveals signs of years of royal neglect. No defenses, besides a crumbled tower, stand between the village and the northern lands, where barbarians and fierce monsters roam freely.

One of the earliest Teyhar settlements, this village helped these barbarian invaders establish a foothold on the coast prior to invading Calas. They brought fire and sword into these lands and eventually dominated the region. Finding tillage more rewarding than pillage some became farmers or woodsmen. However, life in Oester has always been harsh and it remained a struggling village. Most of the Teyhar left for better lands after conquering the indigenous Kalen population to the south.

Many years later, King Lodan of Calas bestowed the land and the title of baron to a Gallian knight named Sir Vernest. Vernest married a relation to the Crown and vowed his allegiance as a vassal. Renowned as a great beast-slayer, Baron Vernest kept many trophies of the strange and fearsome creatures he had defeated. He considered himself invincible, but feared the mortality of time more than anything else.

Rumors spread that Baron Vernest was experimenting on ways to attain eternal life, squandering his wealth, and remitting fewer and fewer taxes to the Crown. So when a new wave of barbarians, known as the Hellar, arrived on these shores and threatened Oester, the Crown offered no support for its defense. These new invaders were more savage and brutal than their predecessors and the now-civilized Teyhar feared them greatly. Oester was soon overrun by these forces, and the baron’s tower came under siege. He asked for the Crown’s assistance, but received none because King Lodan wanted to prepare his army for a counter-offensive at Mullikin rather than throw his support to an errant vassal.

The tower stood the siege for some days before the baron supposedly burnt it down to the ground himself. Great winds from the sea swept the flames toward the nearby forest, and many villagers fled. Those who didn’t escape suffered terribly from famine and oppression at the hands of the invaders. They never trusted the Crown again.

Meanwhile, foul creatures looking for the corpses of the fallen took over what was left of the forest. Any tree that grew here became dark and twisted, and it was thereafter called the Blackened Woods.

The villagers were almost entirely of Teyhar stock and still bore such names despite the king’s orders to adopt local names. They continued to worship their own gods and showed no interest in other religions. Most had little tolerance for those among them that were “different” and viewed outsiders with suspicion and caution. A stubborn and serious mentality made them a determined, albeit humorless, lot. Most were illiterate and refused to learn how to read or write.

These people also showed courage and vigor, however, in overcoming challenging conditions to survive in a particularly inhospitable land. They accepted adversity without whining or self-pity having endured so much hardship in their lives.

Because they felt betrayed by the Crown, the villagers had little sense of trust or loyalty to the king or his kingdom. In fact, the villagers of Oester saw themselves as living apart from the rest of the realm. Independent-minded, these people possessed a strong sense of individuality and self-reliance.

In the distance you see what appears to be a small village. Thatch huts and wooden houses lie mostly on the east side of the road, while a partially-destroyed, circular, gray tower looms over the village to the north. The tower sits on a small hill. The trees closest to the valley look green and healthy, but beyond the confines of the settlement, the trees shrink and twist into dark forms.

As you approach, you realize that something is tragically wrong here. Not only are there no people about, but a sour smell hangs in the air making you feel ill and turning your stomach. Swarms of flies buzz in a frenzy and crows circle overhead. To your horror, you find dead bodies strewn all about the village as you get closer. Most of them appear to have been rotting for many days.

Some of the houses look like they’ve been broken into and have shattered glass windows and bashed wooden doors.

A simple Spot check (DC 10) or closer examination reveals that many of the corpses appear to have been fed upon by some kind of animal other than crows. Many half-eaten bodies lie about, and because the air is still, the stench can be overwhelming. Anyone entering the village must make a Fortitude check (DC 8) or vomit immediately. 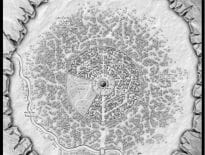