An exclusive 8-paged Aten – City of Life preview can be downloaded at the end of this page. The following text and illustrations are only a small example.

The Congress of Aten (21 delegates), an elected delegation chosen from the various racial elements and trade districts. Representatives are chosen every two winters in a citywide election. The Congress is responsible for organizing trade with the surrounding regions in and out of the urban warehouses, the dispersal of foodstuffs to the population at large, zoning of the election districts, the organization of municipalities, determining the needs of the city as a whole, and keeping open communication between all the sectors of society. This does not include the noble council, who are generally granted a wide berth by the Congress. 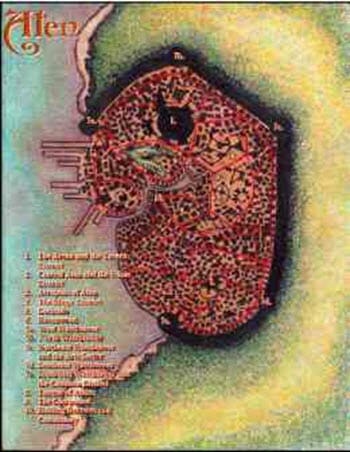 The nobles of Aten, backed by their militias, are chiefly responsible for keeping law and order in Aten, and also lay claim to the most lavish residences in their districts. They run protection rackets throughout the city, taxing the citizens and businesses. Their rule is not overtly questioned, and though the Congress handles matters of treaties, trade, and foreign affairs, the nobles meet in council to discuss matters of property, allocating wealth, and the prevention of turf wars. The nobles manage a makeshift relationship with each other with dependence upon allies and through bribery, extortion, coercion, threats, and treachery to the populace at large. They are also responsible for running fine liquors, wines, and brews in and out of the city through black market channels, and each family has a venerable network of agents, deviants, and thugs. Overall, these activities are kept secret from the innocents of the city, whose view is that the nobles serve their role of policing the city rather well, and they share a reputation for being both fair and swift in dealing with murder, theft, rape, adultery, and vandalism. They use intimidation to acquire information from those that are apprehended and will usually let lesser perpetrators and accomplices off for cooperating with the authorities. Offenders and fugitives of common law will often be sent to the Arena to prove their innocence on the Sands of Battle.

75,000 (estimated permanent residents). The population rises to about 95,000 during the summer, including merchant traffic, slaves, pilgrims, assassins, mercenaries, prostitutes, and the inevitable adventurers. The estimated racial breakdown reflects the overall makeup of the populace: 60% human, 20% halfling, 8% elf/half-elf, 8 % dwarf, 2% minotaur, 1% gnome, and 1% half-orc.

Atenians are known for their fine clay, bronze, steel, and iron crafts, and their artistic talents flourish high above the rest of the known world. Aten is decoratively adorned with various frescoes and statues that serve as an attraction for travelers, which translates into profits for the craftspeople. The magic sector is renowned for its production of arcane items, scrolls, potions, components, and books. Those who travel from Atenwood often cultivate various herbs, hemps, papyrus, and even grapes in abundance that keeps the woods folk rather wealthy. Animals, iron-ore, foodstuffs, tools, weapons, and other goods are imported from around the region of the Fiorenan Peninsula and Nappol’s Sea, as well as the Dragon Kingdoms and Thet. Within the Nyanatzian Highlands, miners have recently discovered an abundance of marble, which is now being incorporated into the eversprawling architecture of the city. The marble is a lush combination of pale greens, reds, whites, and violets. There is now a growing trade in marble crafts, especially during the summer months when the population swells.

The loyal followers of Atinus, The Wardrake, undertake the protection of Aten in times of war. The clergy, and a standing army of 3,000 (F1-F3s) are led by the Knights of Atinus, an order which dates its tradition back through antiquity, famous for their deeds of both glory and honor. These comrades consist of mostly humans, though all are embraced in the common cause of defending the city from peril. Currently, the army can be found throughout the peninsula, consisting of allies from Aten, Atenwood, Greywood, the Highlands, and the scattered villages of the peninsula. Recently, the Knights of Atinus were credited with liberating the fortressstate, Rocky Point, from the clutches of Aten’s rival city-state, Prakis. Within Aten itself, the army takes a less functional role, though they are known to pursue war criminals. For law enforcement, there are twenty-four noble families, each with militias, guards, mercenaries, and hired networks of spies, thieves, and assassins. The average family will employ a militia of 500 standing guards and officers, though powerful families can afford up to 1,500 swords if a turf war heats up. Two churches, the Temple of Urthur and the Temple of Atricles also patrol the streets for crime, usually in opposition to the noble families. Aten also maintains a venerable navy that was developed by both the humans and minotaurs of the realm and numbers 20 galleys, 50 warships, and is supported by 150 keel-boats.

~ Toutalis the Bright (LG human male Wiz13), adorned with gold and white robes, a fiery wisdom can be seen in his piercing, brown eyes, and he is considered the model citizen of Aten. A widower for some years now, he is viewed kindly by his neighbors, who all know his name quite well. He is famous for being the schoolmaster of a recently built magical academy founded to teach the arcane arts to the common folk and thus laying the foundation for a bright, magical future in Aten. At the age of 46 winters, Toutalis is well traveled and every three summers sails to his magical homeland, Ereditia.

~ Mithuul the Red (N half-elf male Wiz11), easily recognized by his red robe and cape that are always about his person. The head of a sizeable merchant cartel that deals specifically with gemstones imported from throughout Nappol’s Sea, he is looking to expand into the trade of marble crafts, and is taking the time to gather and craftsmen into his organization.

~ Thilda (NG human female Sor4/Wiz3) is a relative newcomer to Aten, though this has not stopped her from gathering young magelings around her with the common goal of forming the Mages’ Guild of Aten, which currently numbers about forty. Mostly, the guild is dedicated to sharing arcane knowledge, though they have a strong streak of benevolence led by Thilda, who commonly seeks out citizens in distress who need aid or comfort. She also runs a soup kitchen when not otherwise occupied with the guild.

~ Gabriel the Dark (N human male Necr9), is hardly ever seen in public, He resides in his magically locked tower in the Magic District working on unknown designs. When he does venture out his violet-black cloak and his overall pale complexion will complement his dark gaze. However misunderstood by the commoners, Gabriel helps to run an orphanage where he grew up. He seeks a quiet existence away from the politics that dominate Aten. It is thought that he once believed in a cause, but that a fall from grace led him to a darker path.

~ Deminora (NG human female Witch5) is a member of Aten’s witches’ coven, known as the Keepers. She adores the animals of Ravenwood and Atenwood, and has befriended their gentle natures. She is often found wandering the streets of the city, or the wood paths of Atenwood, greeting strangers, proclaiming the divinity of Dyanetzia and her children, and also offers divinations free of charge. She is interested in discovering what she views as new “talents” for the art of the Craft. 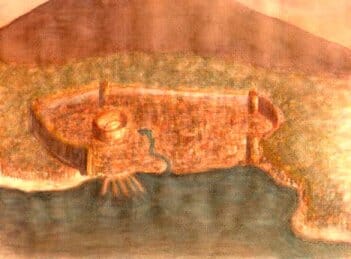 ~ Eldon the Red (male halfling Wiz8/Clr7) is the High Mage for the Temple of Eredine. Eldon has led the church for 15 years and is easily recognized by his bright red hair and deep purple robes. Under his tenure the congregation has increased threefold swelling to over 1000 members, some become spell casters or clerics, others support the church financially. Eldon has worked closely with other spell casters in Aten, including Toutalis and Thilda, helping them to set up their schools and encourage the teaching of magic. He has connections with Mithuul the Red who has used his connections among the merchants to provide outlets for the Temple’s sale of books and scrolls. Eldon has attempted to reach out to Gabriel the Dark without success. He supports Gabriel’s orphanage in concept, but also must contend with members of his congregation who distrust Gabriel. Eldon’s overall goal is to spread the word of Eredine and to make magic and the powers of Eredine available to the general population of Aten.

Temples dedicated to Atinus, Poena, Eredine, Mortacia, Atricles, and Urthur, all exist within Aten, though Dyanetzia is by far the most commonly worshipped deity. Shrines bearing her essence and symbols adorn the city’s walls, buildings, trees, and streets. As the seasons progress throughout the year so do the festivals of Aten. There are a number of witches’ covens that operate within the walls of the city, carrying on ancient rites in Ravenwood. Within the forums of the acropolis, shrines and worshippers can be found of most of the other deities as well, who gather to discuss the ways of divinity, the promise of rebirth, the essence of love, the ideology of philosophy, the inevitability of death, the glory of holy battle, and the joy of life. Religious freedom is exercised in Aten, and the city is often considered a melting pot of divinity.

The Guild of the Greycloak, founded by the halflings who live in abundance on the shores of Aten, was originally a band of halfling adventurers who served to protect the original settlement of the Fiorenan Peninsula, Rhytin. After the halflings migrated from the north, the various tribes of humans, orcs, dwarves, and more recently, elves followed them. Aten was founded right on top of Rhytin and the halflings quickly adapted into human society. The Greycloaks still play a part within the society, and they remain to protect the halflings, but in a new way: by making a large profit! As such, the guild itself operates with the front of legitimacy, and they cover their deceptive tracks very well. Overall, they are a group of entertainers, bards, thieves, and merchants who carry on their work by day, and lay claim to untold fortunes by night. The guild’s treasury is overseen by its guildmaster, Jenniotto (NG halfling female Rogue5/Bard4). She is fun to talk to, and uses her wit and humor to conduct diplomacy with the city’s nobles, who are none the wiser about her group’s activities. She is careful, cunning, and brave when she needs to be, and she informs her agents precisely, to which tasks need to be appropriated without drawing suspicion from the guards or worse, the noble militias. These wandering minstrels are often considered heroic in the eyes of the halfling populace, and they are known to be very generous in helping out families struggling to make ends meet.

Recently, Gregos the Quick (N human male Rogue5/Bard3) founded a new rogue’s guild in the Arts Sector, operating out of the Flying Dragon Theater. Gregos is balancing the legitimate theater with his rogue activities, and is seeking out members for the guild’s unique talents in acrobatics to spy, steal, or commit other crimes. Wealthy members of town are known to hire this often half-witted band for particular jobs that may require a stealthy approach.

literature of ancient greece has been a term of my study

time in greece and test living with greece people

"Wait! I got a spell for that!"
Echoes from the Wyrd 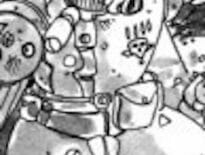