You are here: Home / GameWyrd / Echoes from the Wyrd / RPG Previews: House of Vega | Echoes #14

An 6-paged House of Vega preview can be downloaded at the end of this page. The following text and illustrations are only a small example.

And So It Continues

“Medea, my love, what troubles you?” Altoyo ran his hand lovingly through his wife’s hair. He had lived with her for centuries now, but he still could not read what trouble lurked behind those dark eyes.

“Altoyo, I have told you of my distaste for using outsiders. This plan of yours will only bring sorrow to this house. Can we not find another way?”

She cast her eyes downward to avoid looking Altoyo directly in the face, but he would have none of it. Gently, he took her chin in his hand. “They will have many challenges, and I need all of the servants most loyal to me here to protect you… and all that we have built here.” He leaned down and kissed her gently on the lips.

“Surely you do not believe that they can survive even the simplest of the missions before them. The Trieste and the Legion roam the land looking for the armor. The Mermaids will surely seduce them. These are not threats that ordinary people can deal with!” She stood and strode to the window overlooking the vineyards with a grace that no living creature possessed.

Altoyo sighed and followed her. He looked at her in the moonlight. “I only wish to help the mortals, aid them in seeing the way to peace and prosperity. These are not ordinary people we have recruited. They have all come highly recommended, and they possess skills beyond what most mortals could ever hope to attain.” Altoyo rested his hands on her shoulders, trying to comfort his wife. He knew better than to think she had compassion for these poor souls, but she did love him and their life. She would not give up either without a fight. 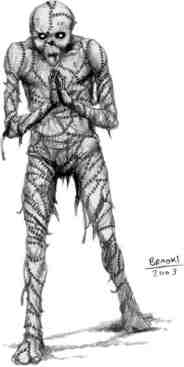 Medea craned her head back to Altoyo. “The worst of it is if they learn of your true goals they may turn on you, Altoyo. As you have said, this goes beyond the average mortal. They could be a threat. If they meet Iberid…”

“Then they will have met my shadow.” Altoyo laughed at his ironic statement. In setting these mortals against his own kind, he made them into the most formidable threat to himself. The irony was not lost on him.

The creatures and personalities outlined here should be considered extensions to the Shades of Earth Core Rules.

The leather golem is the creation of the Order di Dilucesco and is constructed by wrapping cured human skin around a Catholic relic. These human skins are often acquired after a member of the order has died of natural causes. These are mindless brutes that take a simple series of commands. If they are commanded to protect an object, they will not be able to be lured from that object but will stay within sight of it while fighting off intruders. If the intruders do not approach the object it has been commanded to guard, it will not move.

Leather golems were first created in 1408 by a priest, Father Pious DiCielli, researching the animation of objects in the Mencius Codex. The first leather golem he created was imperfect and retained some of the memories of those whose skin had been used. This made an entirely mad creature that went on a rampage. Although his superiors were reluctant to trust a second effort, they allowed DiCielli to try once more. They saw value in controlling a creature that was so resilient to damage. The second attempt proved successful, and the construct was used to discretely guard the nobility of the church.

Leather golems may subdue opponents using animated leather straps from their body. This has a range of 25’. If the target is successfully hit then the target must make an AGL – 4 + the number of rounds subdued check to escape. For instance, the first round the target is struck they receive a AGL – 4 check. If successful they are freed; if not they receive a check vs. AGL -5 the next round. If the straps are hit (defense=10) with 25 points of damage from an edged weapon, they are cut and the target is freed. Once the Leather golem successfully hits its first target, it may attempt to attack others. Leather golems have no mind and thus are not affected by spells targeting the mind. They receive no damage from electrical attacks. They receive only 1/2 damage from fire and projectile attacks. All other damage types are normal. 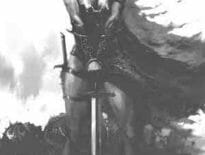 Echoes from the Wyrd RPG Previews: Out for Blood | Echoes #14 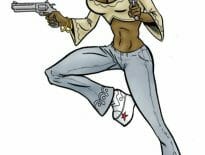 Echoes from the Wyrd RPG Previews: Macho Women With Guns | Echoes #14
wpDiscuzComment Author Info
Manage Cookie Consent
This site uses cookies 🍪, and links are ads that may earn bloggers some money 💰, and with this alert, I very much hope that these dark truths 🧌 are acknowledged.
Manage options Manage services Manage vendors Read more about these purposes
Preferences
{title} {title} {title}