You are here: Home / GameWyrd / Echoes from the Wyrd / RPG Previews: Monsters of the Boundless Blue | Echoes #14

Monsters of the Boundless Blue

An 3-paged Monsters of the Boundless Blue preview can be downloaded at the end of this page. The following text and illustrations are only a small example.

“Looks like a good haul today, men! Now, let’s see what we’ve caught. Plenty o’cod as usual, but… Gads, what a mess! What the devil happened here? Half the damn catch’s in pieces! Ah! A sabrefin! Of all the luck…! Somebodyget some hooks and gloves together. We’ll have a time cutting the bastard out without tattering the net. Oh, an Kovan, get below and fetch the new boy. If someone’s going to clean these guts up, it may as well be him. Good introduction to the job, wouldn’t you say?”

– Captain Stobock of the Sultry Maiden

Although they are considered mundane for their lack of exceptional powers, intelligence, or size, kaiptari are among the best-defended fish in the seas. They roam unhurriedly through the waters, never fearing the approach of a larger predator. With their natural armaments displayed like ruffled plumage, there are few creatures capable of eating them, and they are also well equipped to catch their own meals. 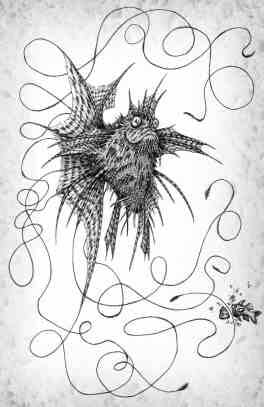 The kaiptari’s nickname, “sabrefin,” comes from the many sharp-edged spines that sprout all about its body. Their shape and numbers give the appearance that the fish is blossoming with knives. This is somewhat accurate, for the spines are indeed sharp and stuff enough to deliver deep cuts. Because the concentration of these blades is so high, individuals without armour will receive not one but several gashes. Those people that have apprehended kaiptari have found that the fins can be removed and utilized as cutlery, but the pains of extracting the broad spine can be more costly than the product garnered.

Less obtrusive but even more lethal than the edged obstructions that cover their red streaked, sand colored forms, trailing behind all kaiptari is a wispy wake that turns flesh to ribbons and hews bone more easily than a keen sword. Growing from the tip of each blade is a thread so fine as to be all but transparent, yet stronger than a steel wire several times its width. So thin are these hairs that if they should snag upon anything but the strongest of materials, they will incise into it and potentially cut through the object cleaner than any hammered metal tool could. Since the threads extend as far as twenty feet behind the kaiptari, creatures that pass through the trail are often reduced to dissevered parts. So precise are the slices that some physicians have taken to using saber-thread in their surgeries by fashioning a device called a sawstring. By binding each end of the strand to a metal handle, they are able to hold the line taut and guide it back and froth to amputate gangrenous or otherwise unsalvageable limbs. Other professions have also found sawstrings to be useful, including butchers, carpenters and assassins who use them as decapitating garrottes.

While many of the deaths they cause are incidental, kaiptari are carnivores and sometimes kill with intent. If the chosen quarry remains still enough, the sabrefin will calmly swim around it and then close the circle, ensnaring the target in a mesh of lacerating fibers. Should they prey to prove too wary to be entrapped, a kaiptari will likely just attempt a charge, forcing its bladed fins into flesh and muscle, stabbing and slicing until the victim is lifeless and the shreds can be torn free from the mutilated kill and inhaled into the victor’s pug mouth.

“Kaiptari are indeed a tricky matter to deal with, for a simple mistake could cost one life or limb. As if holding off a hungering sabrefin weren’t trouble enough, one must keep a sharp eye open wide, for if you see frittering about, its train of deadly strings will be in pursuit, and they are not lines to be crossed. They cannot slit metal, but the threads have a way of sliding along armor plates until they find a chink or crack, so they can often find their way to a point without protection. Constant vigilance is required to survive in the depths of the seas. Constant vigilance!”

“One day as I was going about my business on the seabed, I faced the dual calamity of an aggressive kaiptari on one of my sides and a killer shark on the other. The situation was sizing up to be a gristly mess, but I was able to seize a chance and save my own skin. Advancing on the kaiptari, my aim shone true and I impaled it on the end of my reliable harpoon. I was the able to use this helpless foe against the other predatory beast that had been closing on me. Back and forth I swung my sabrefin polearm until the waters were red with the shark’s crimson juices. It was so effective that I considered implementing sawstrings into my weapon permanently, but I decided that it served me well enough and I was better off not losing a hand to careless misfortune.”

Echoes from the Wyrd RPG Previews: Last Rites of the Black Guard | Echo…

Echoes from the Wyrd RPG Previews: Out for Blood | Echoes #14
💰 Copper Coins 💰 Geek Native is an affiliate and may earn commission on purchases you make from third-party sites.
🍪 Privacy & Cookies 🍪 The site uses cookies to survive. By accessing the site, you agree to use your browser to control cookie use or take 1d4-3 privacy damage (tracking). If you defeat cookies via ad blocking, please consider the Patreon. An intro to cookies, and how to control them, can be found here. I Manage Cookies