You are here: Home / GameWyrd / Echoes from the Wyrd / RPG Previews: Macho Women With Guns | Echoes #14

An 10-paged Macho Women With Guns preview can be downloaded at the end of this page. The following text and illustrations are only a small example.

Characters in Macho Women with Guns

Scientists, hackers and engineers of all types fit within the scope of the Pinup Geek but, unlike many others who engage in these occupations, these girls are hot. They inspire worship and envy from all other geeks and often up fronting video games programmes on the TV or discussing the finer points of robotics with plump losers. 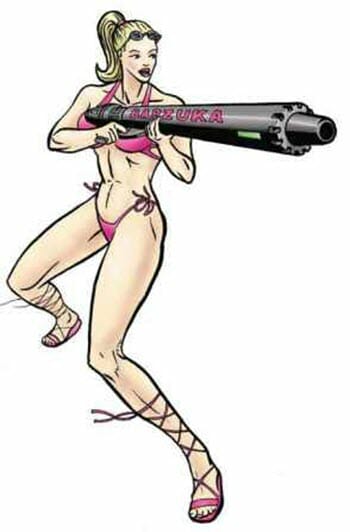 Prerequisites
Pinup Geeks must have an Intelligence and Dexterity of 13.

Skills
Choose three of the following skills as permanent class skills. If a skill the character selects is already a class skill, she receives a +1 competence bonus on checks using that skill.

Bonus Feats
Select one of the following;

Special
Heyyyyy: Pinup Geeks can enact ‘The Fonz Effect’ by hitting a computer or machine and spending an Action Point. This restores it to working order with half of its original hit points if any.

Magnificent Tool: Pinup Geeks start play with $500 of tools, amongst which is a free giant spanner, which may be used as a metal baton with an additional point of damage.

Techno Tinker: Pinup Geeks gain a +2 competence bonus to any Repair or Computer Use checks they make.

Blood Sweat and Tears: Pinup Geeks can sacrifice their own hit points to restore the hit points of objects or vehicles.

Money Pinup Geeks start with an extra $1,500 in savings.

Law enforcement personnel include uniformed police, state troopers, federal police, federal agents, SWAT team members, sheriffs and military police. Police Chicks can be involved in anything that vaguely resembles law enforcement in the world after The Dang, including rent-a-cops and private security guards. Uniforms and big phallic sticks come with the territory, so too does a penchant for brutality, coffee and doughnuts.

Prerequisites
Police Chicks must be aged 20 years and over.

SkillsChoose three of the following skills as permanent class skills. If a skill the character selects is already a class skill, she receives a +1 competence bonus on checks using that skill.

Select one of the following;

Special
Commanding Presence: By spending an Action Point and yelling an order the Police Chick can force a target with three or more Intelligence to ‘Respect her authority’. The Police Chick makes an Intimidation check, the result of which is used as the DC of the target’s Will save. If failed the target will obey, within reason, any order they are given. Obviously this should be such things as ‘Freeze!’ or ‘Drop your weapon!’ as commands such as ‘Shoot yourself in the head!’ or ‘Dive into the pool of toxic waste!’ will be ignored and any respect for the Police Chick will be lost. The ordered individual will not do anything that will immediately place themselves in obvious mortal danger.

Standard Issue: Police Chicks start with a police uniform, pepper spray, a tonfa, a 12-gauge pumpaction shotgun with thirty-six rounds and a .38 revolver with eighteen rounds.

Immune To Arrest: Police Chicks can do pretty much what they like and get away with it. Nobody questions their authority. Police Chicks are immune to anyone else’s use of Commanding Presence and if jailed or contained by any legitimate authority (rather than bandits or kidnappers) will be released within twenty-four hours.

Fall Down The Stairs: Police Chicks are intimidating and experts at interrogation gaining +2 competence bonus to their Bluff and Intimidation checks.

Police Chicks start with an additional $500 in savings. 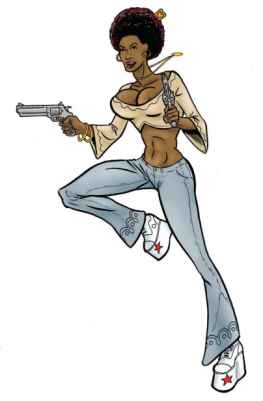 A feat is a talent, special ability or party trick that enables a character to stand out from the crowd or refl ect enhancements to their abilities. In the world of Macho Women with Guns these talents are more likely to be used to grant horrendous bonuses to a character’s combat abilities until they are an unstoppable killing machine that would make Ted Bundy throw up his hands and say ‘Whoa, chill’.

Feats are a great way of personalising a character, individualising and customising them, after all, not every ninth level schoolgirl is the same. Besides the feats presented here there are many, many other feats scattered throughout other d20 products that can be cannibalised and integrated into Macho Women with Guns (with a big enough hammer).

The feats that follow are special and unique to Macho Women with Guns and should be treasured, nurtured and used for good, not evil. Unless you are playing a Bat-winged Bimbo, in which case knock yourself out.

Skilled in the art of bad-mouthing and twofacedness you may appear all sweetness and light to someone’s face but the moment their back is turned you change into an evil harpy, quite at ease with the idea of plunging a dagger (metaphorical or physical) between their shoulder blades.

Prerequisites
You must have at least five ranks in both Bluff and Move Silently skills.

Bat out of Hell (Magic)

You have the ability to generate a burst of speed to escape your enemies.

Prerequisites
You must have the Demon Taint feat or be a Batwinged Bimbo in order to choose this feat.

For example; Tawney, bimbo-about-town, is set upon by mutated midgets in the mall. Taking cover behind a table she keeps still, firing at them with her pistol and feeling pained as she hits an ice-cream stand by accident. Conscious of her impending peril she enables her Evil Powers. Two rounds later as the evil midgets close in she spends ten Mana points,five for each round of move-equivalent actions stored, before flapping her wings and springing into the air, moving a colossal distance in a straight line and clear out of the mall, leaving a pair of very confused midgets in her wake.

A pair of bat-like wings protrudes from your back. These wings are fully functional and are available in a wide range of colours including red, black, blue or green, all sharing that pleasant leathery texture.

Prerequisites
This feat may only be selected by a Bat-winged Bimbos or characters with the Demonic Taint feat. Benefits Bat Wings allow you to fly at a speed of 60-ft. with a maximum ceiling of 100-ft. They also aid you in Jump and Balance attempts. 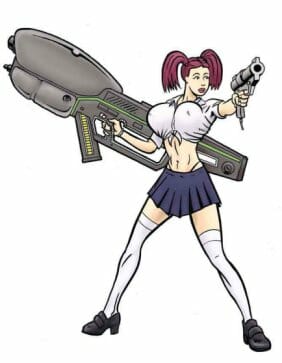 Anyone can carry a Small or Medium weapon in one hand and fire it successfully. You, however, are able to heft weapons that would make a Jesse Ventura weep.

Prerequisites A character wishing to choose this feat must have a Strength of 16 or higher and the Personal Firearms Proficiency feat.

Carrying Large weapons is for school children. You prefer to wield weapons that would make a T1000 gasp.

Prerequisites A character wishing to choose this feat must have a Strength of 18 or higher and the B.F.G. Profi ciency feat.

Benefits
You may wield Huge weapons in one hand as if they were one size category smaller than their actual size. As such both Huge and Large weapons may be used one-handed as though they were Medium-size weapons, Small weapons, however, are far too fi ddly for your big hands, as such you are incapable of using any weapon smaller then Medium-size.

Blow Your Way to the Top (General)

You have gained a high position in your chosen field through questionable methods. Prerequisites
You must have at least five ranks in the Nookie skill.

Benefits You gain an extra level in reputation, a windfall of $1,000 and a +1 competence bonus to seduction attempts (seduction is detailed in the Macho Skills chapter starting on page 28).

You have been trained to brandish your crucifix while laying low your enemies.

Prerequisites
You must have the Holiness feat or have taken the Renegade Nun occupation in order to take this feat.

Benefits Your ability to Turn Undead no longer uses one of your attack actions leaving you free to dispatch such creatures back into the infernal pit from whence they came while still firing your shotgun.

Echoes from the Wyrd RPG Previews: House of Vega | Echoes #14 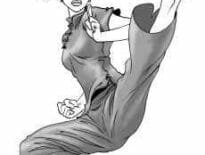