You are here: Home / GameWyrd / Echoes from the Wyrd / RPG Previews: Dragon in the Smoke | Echoes #14

Dragon in the Smoke

Dragon in the Smoke is a pre-written Victoriana adventure. This preview is compiled from spoiler free sections of the book.

The Opium Wars are some of the most despicable acts in the history of Western imperialism, rivalling even the atrocities committed in later days. The short of it is that in the mid 19th century two wars (1839-1846 and 1856-1867+) were waged by the western empires (spearheaded by Britain) against the eastern empire of China. The result of the fi rst war was a crushing defeat for China, and with the added complication of the Taiping Rebellion the second war looks to be heading the same way. The purpose of the war was to allow western traders to export their goods to China, most importantly the drug Opium that was illegal in China.

The wars left China and it’s people humiliated by the barbarians, and the ports forced open to trade by the war have become criminal havens where drugs and prostitution are the norm, and where British citizens and their associates are exempt from Chinese Law. In real life history (understandably) the resentment about this lingered on for years, one might say that the real Opium Wars did not in fact end until 1997 when Hong Kong was returned to the Chinese. 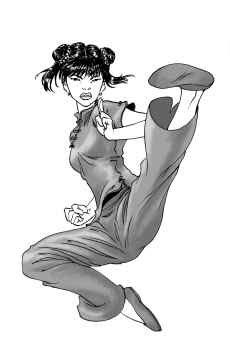 They might not be in the core rules, but martial artists do exist in the world of Victoriana. The omission from the rules was intentional, as Europe does not have a martial arts tradition and, in our game era so far, there has not been sufficient cultural contact with the Far East for the media to develop its fascination for the arts. Despite this if we gave him or her the choice we all know that every other player would have some far-flung reason for his character to have visited China or Japan and gain training from some exclusive dojo or monastery in five minutes flat.

However, for those who have seen Shanghai Noon and the recent Shanghai Knights, or even Brotherhood of the Wolf it cannot be denied that the martial artist offers a great deal of fun in a Victoriana game simply due to his nature as an social outsider. So let’s clear a few things up – Martial Arts do not simply represent the skills of a ‘good fighter’ – skill with a weapon is represented by a high weapon skill and enhanced by high dexterity. Martial Arts are something different, and they go beyond skill alone.

Martial arts abilities are the result of constant training since early childhood, the forging not only of body, but also of the mind. With discipline and deprivation the two are formed into a single cohesive weapon of destruction, focused and oblivious to pain or penalties. Few of those trained truly become martial Artists, many simply become exceptionally skilled warriors.

A player character Martial Artist should consider how he spends his option points, and which complications he takes. He is certainly an Outsider, he no doubt has an Allies rating (varying with just how far away his homeland or monastery is). Our character should also take a new talent described here: Martial Artist, which allows him to choose his first abilities. The Martial Artist talent costs 3 option points at character creation, and can be purchased multiple times, the talent must be bought at character creation in order to learn Martial Arts abilities at a later date. Each purchase of the talent allows the character to choose an additional ability from the Abilities List, as long as the requisites of the ability have been met. As the character gains experience the talent can be bought again at a cost of 9 XP, allowing additional abilities to be learnt as the character develops.

Abilities represent the special feats that make your Martial Artist unique, they might grant bonuses to hit rolls, bonuses to damage, or other abilities. Every Time you take the Martial Artist Talent, you choose an additional ability. Some Gamesmasters may wish to enforce study & practice for a period before the ability can be used in play (see Victoriana, p186).

So, martial artists are rare compared to guns and swords, but fortunately you don’t need to take your characters all the way to China to get beaten up by them. London has a reasonably large Chinese community, and players interfering with them might be faced by a couple of martial artists. The orient isn’t the only place to encounter the martial disciplines; there are dervishes in the Ottoman Empire, the Czarina Pyetra in Russia, and Thugee assassins from the Indian jungles. All these groups are indoctrinated and trained enough to qualify as Martial Artists. When your players face a martial artist for the first time they should be left reeling, confused and mauled, wondering just what hit them – even if they win the encounter out, they should think twice in the future before jumping into the fray with such dangerous foes – and as for corporeal mediums…

When you create a martial artist to face (or aide) your characters, create him as a character by giving him the Martial Artist talent – the beauty of being the gamesmaster is of course that you have a limitless amount of option points to play with, but don’t get too carried away it can be easy to overkill and create a powerhouse individual your characters simply can’t match. Martial arts should be reserved for character villains; the arts are too rare in Europe to be relegated to supporting cast, although a Martial Artist will often be accompanied by brethren who, if not martial Artists, are certainly deadly in their own right.

The character has been trained on how to grab and hold his foes, adding +3 to body for grappling purposes.
Requisites: none 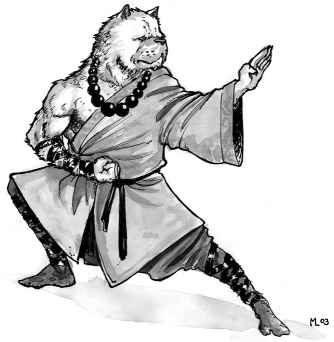 Instead of striking, a character with the martial artist talent may declare he is throwing his opponent. The attacker makes a normal attack. If it is successful, he throws the target to the ground and does his normal strength damage. After being thrown, the defender is prone, and must act after the attacker next round regardless of their initiative rolls.
Requisites: Martial Grab

This is a strike targeted at the vulnerable nerve clusters of the human body. As such, the target does not get his fortitude versus this attack. Since a good deal of accuracy is needed to land these blows, the attacker must spend at least one round aiming at his target before using this attack. Does 2d6 damage, at -2 to the action roll to hit.
Requisites: none

This is an all-out attempt to mangle your target. An offensive strike covers a flying kick, a full-out haymaker, or any other ‘full on’ style attack. Adds Martial Arts rating x2 to basic damage, but at -4 to the action roll to hit.
Requisites: Martial Strike, Nerve Strike

This manoeuvre represents any move where the attacker falls to take down his opponent. It can be a judo throw, a sliding takedown, or any other move where both the attacker and his target end up on the ground. Martial throw, with +2 to the action roll to hit, target and attacker both knocked prone. If this attack missed, the attacker is on the ground at the feet of his opponent anyway. Not a good place to be.
Requisites: Martial Throw 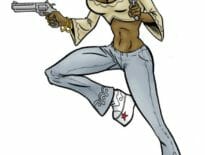 Echoes from the Wyrd RPG Previews: Macho Women With Guns | Echoes #14
Echoes from the Wyrd Sapphire College for Elf Maidens | Echoes #14
💰 Copper Coins 💰 Geek Native is an affiliate and may earn commission on purchases you make from third-party sites.
🍪 Privacy & Cookies 🍪 The site uses cookies to survive. By accessing the site, you agree to use your browser to control cookie use or take 1d4-3 privacy damage (tracking). If you defeat cookies via ad blocking, please consider the Patreon. An intro to cookies, and how to control them, can be found here. I Manage Cookies