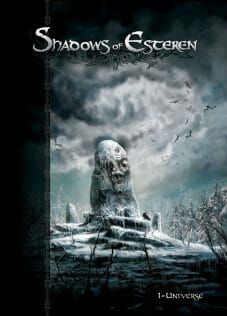 Shadows of Esteren first appeared on my radar when it smashed its Kickstarter campaign to get translated into English. I scratch my head because I do not believe I backed the campaign but even at this stage the game oozed quality. Let’s face it; grim fantasy games are hard to do well. Even at the Kickstarter phase it looked like Agate RPG could do this challenging genre justice.

So, here we are with the book and the question; “Is it as good as I hoped for?”

It is. It certainly is. Shadows of Esteren is rich in atmosphere and wise with mechanics.

Book 0 is the prologue. It contains an introduction to the universe, a summary of the game system, some scenarios and sample characters.

Book 1, the full rules system, has the world of Esteren through the eyes of the inhabitants (with a focus of those living on the Tri-Kazel peninsula), its kingdoms and factions. It includes the complete system, player aids and lots of stunning art.

I’m going to get my grumble out of the way now. Book 1 is a complete RPG and I could run a session in Esteren tomorrow if I wanted to. That said; the attraction I feel for the game is due to the mysteries of the Shadows – that is to say the supernatural creatures that sometimes brush the edge of Book 1 and the lives of the people in the world. There is clearly something going on. The plan, though, is for Book 4 “Secrets” to be the great reveal. Until Book 4 comes out and I get my greasy paws on it I don’t have the full back story to Shadows of Esteren. 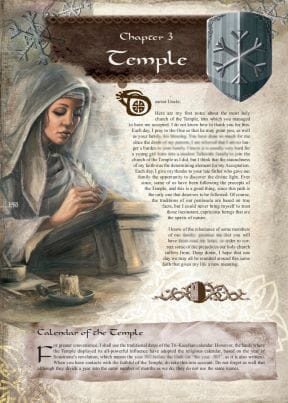 The lack of the full story, the big picture, puts me off. I want to start running games where the players can begin to get drawn into the darker side of an already grim and gritty world. I certainly don’t want to run scenarios that accidently go against whatever the secrets in Book 4 turn out to be.

That’s a big grumble. Does that mean I’ll hold back in recommending Shadows? No. Not at all! Even if you don’t catch the bundle deal and go straight for Book 1: Universe you’ll benefit from having this RPG in your collection.

One of the reasons why it is worth starting off in Esteren before the secrets book comes out (and perhaps one of the reasons Agate RPG was happy to keep the secrets/truth until later) is that this is a hugely rich and detailed work. The Universe book spends a lot of time wonderfully creating the world, the people, the history and atmosphere for us and in order to run the chilling medieval style winter encounters the game hungers for then GMs (or Game Leaders as they’re called here) need to know it well. It may be the case that groups should start off on the basics of Esteren before they explore too far into the dark secrets.

Have you run a horror or chiller game before? If you’re running a Cthulhu mystery set in 1960 then the advantage you have is that the “world of 1960” is not unknown to you. You have a good idea of the technology of the time, of what the politics of the decade was and what society was like. You don’t need the RPG supplement to re-create all that for you. How well do you know the Tri-Kazel peninsula?

Some of Shadows of Esteren’s success comes from the understanding that the day to day world needs to feel very real before the sinister surreal of the supernatural can be deployed at full effect. Unlike those Cthulhu supplements, Esteren needs to be firmly created for GMs and players alike. Shadows of Esteren is a game that uses a sanity points mechanic. 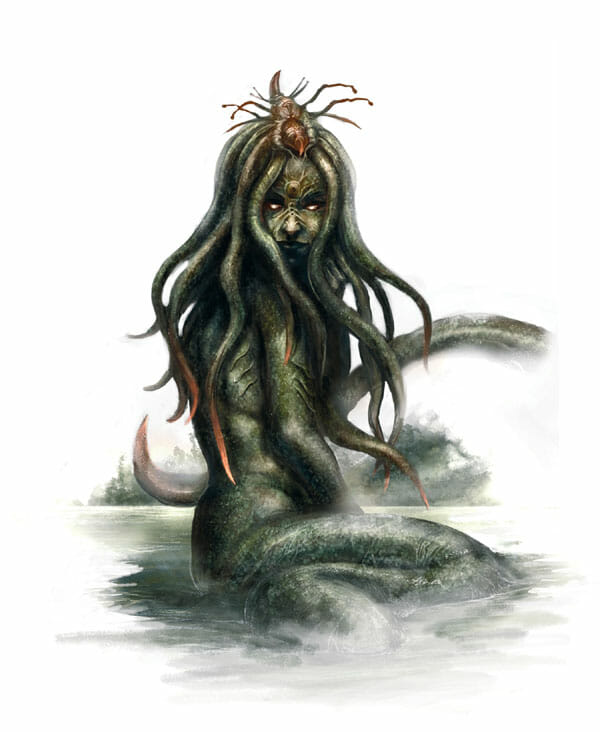 The authors approach to helping the reader understand the world is through a series of “in character lessons”. In some cases that means sitting in on children’s lessons as the village teacher explains the world to them. This could be dull and patronising if done poorly but fortunately manages to avoid that trap, although my enthusiasm for finding out about Esteren and the Tri-Kazel peninsula surely helped too.

Shadows of Esteren offers forms of magic that most “everyday people” will have heard of even through the setting comes across as much lower fantasy in tone than your D&D inspired RPG. Magience is a blend of machine and alchemy. A magical substance known as Flux is used to power artifacts that would be impossible without it. Rather nicely, Flux is relatively easy to get in some parts of the world and a black market premium elsewhere. This gives GMs a natural way to scale Magience in (or out) of their games as players come up to speed. There’s also the ancestral powers in Demorthen Art and clerical magic in the Miracles of the Temple.

I really enjoyed reading through the game’s rule system. The chapter begins with a statement of intent; the mechanics must not get in the way. The rules actually say that if rolling some dice might mess up the atmosphere of the game – don’t do it. That’s wonderful and quite brave. 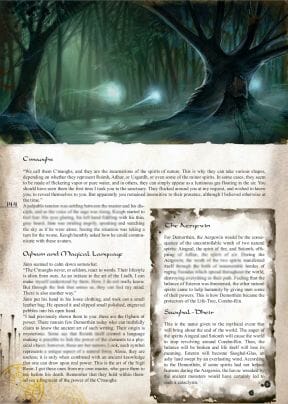 The game makes use of skill trees (a concept CRPGs will be familiar with). Typically, a skill line has 16 generalised domains, each of these domains tend to have different disciplines which have a more precise area of influence. Domains are also linked to a “Way”. Ways help describe characters. For example, Craft is linked to Creativity.

Shadows of Esteren manages to be one of those games in which the character generation fits the atmosphere of the world setting. Characters may have Feats but action hero like features of near supernatural brilliance is certainly beyond them. At the same time, the game mechanics help support the atmosphere too (as anyone who’s sat and stared at a sanity box on their character sheet while wondering whether their character should explore that cave alone or not will tell you).

It’s worth noting that that the layout and design of Shadows is also hugely influential. This is a highly visual RPG. Almost every page has art on it and, if not, is stylised and decorated. This makes for a large PDF but I was able to use Dropbox to move it over to my Nexus 7 and read it on my Kindle app. I’d prefer a paper version of a book like this but found the app’s search function very handy when it came to checking back on previous topics in the 300 (nearly) page download.

I’ve made the effort of including not just art but also whole pages from Shadows of Esteren in this review as I can think of no better way to accurately reflect the presentation and style of the game. I think it’s a howling success.

I downloaded Shadows of Esteren with real excitement for what the game might hold. I’m still excited. This is a good game and an even more promising series. Roll on Book 4: Secrets.

Note: This is not a play test review. The download was bought and paid for.

I’ve been playing in the trilogy of Adventures that came with the Kickstarter and they do not live up to the potential of the game. Railroading abounds and the section on experience says it’s it’s a fast system where characters learn new abilties quickly. It lies. Also the magic system oozes character much as your magic user will ooze blood all over the floor after he casts his one spell for the week and then realises he’s terrible in combat, because ALL the characters are terrible in combat compared to the NPC’s they meet. It talks a good talk and… Read more »

Some gamers really enjoy pre-written adventures; especially when they’re new to a game.

I’m not one of them. It’s really rare to find one that’s flexible enough to work or good enough to allow the railroading that the lack of flex demands.

The way you describe the magic system is as I imagined it would be. Sounds pretty good – but I’ve not played it so I can’t work out whether its as good/dangerous as I hope or just feels frustrating.

Scimon : this game is not D&D indeed… a warrior can be built to be strong in combat, but that’s not the point. It’s a dark and dangerous universe, not a high fantasy one. 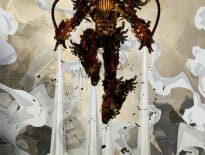 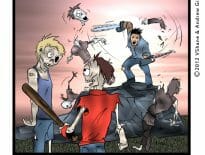