Talzhemir Mrr is the co-creator of the RPG Quicksilver and the MMOG Furcadia. More recently, Mrr worked with Jeff Dee on the stonepunk RPG Cavemaster which has been picked up by Chronicle City. Talzhemir has kindly agreed to a Q&A interview with Geek Native to discuss Cavemaster.

How would you describe “stonepunk” as a genre to gamers?

“Steampunk” explores how Victorian earth might have developed if it hadn’t been for various accidents of history. “Stonepunk” applies that to the stone age. We’ve “reset the clock”; you proceed organically from there. We fully expect that after a while, your players might be doing things like making pistol crossbows using Aurochs horn strips. We say “stonepunk”; it could also be called “being a retro-futurist”. 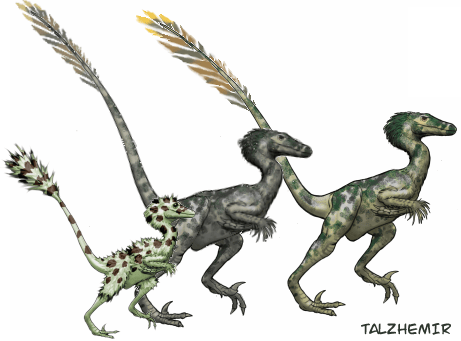 You worked on the world setting for Cavemaster. What challenges did you face?

My biggest obstacle was getting raw information. I wasn’t trying to be (pre)historically exact, but I couldn’t even find rough basics. There’s just no online service where you can enter a date and get a list of what creatures were alive at a particular time. Then there’s a language barrier. Much of the best creature data was in German or Portuguese.

If you had more space in the book and time available – what additional setting material would you have liked to include in the game?

The game as written is loosely North American; I’d have included a campaign setting based on the part of Europe known today as “Doggerland”. It’s a big chunk of land north of the Netherlands that, by 6000 years ago, had sunk into the sea. An amazing archaeological site in Yorkshire called Star Carr was probably a part of it.

Cavemaster is kind of ethnocentric, and we apologize humbly for that. There’s no Siberia, no Africa, no Jerusalem, no Australia, and so on. I wish I could have included the Cavemaster versions of the wide-cheeked Red Deer Cave people, little Flores (“Hobbit”) people, enigmatic Denisovans, and many more. The Kickstarter included printed books, which we had to order, so more pages would have required more funding. We made it as big as we could.

Are there any areas you’d like to see gaming groups explore and expand for Cavemaster?

Definitely! You know how folks translate real cities into “World of Darkness” settings? There’s “Seattle “by Night” and “Dallas by Night”. Well, I hope “Cave Masters” consider doing something similar using their own location. If you’re in the U.S., you can do Paleo-Chicago or Paleo-Indiannapolis, for instance. Of course, there’s a lot of places people live now that were unhabitable at that time due to glaciers. (Sorry, Paleo-Dublin!) 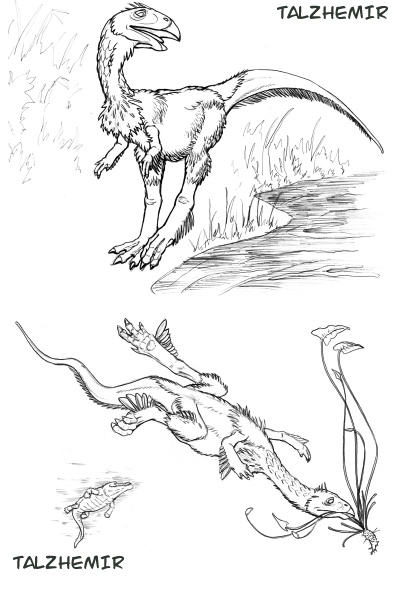 Cavemaster not only mixes cavemen with dinosaurs… but there are aliens too. Was that an easy decision to make?

No, it took work. As the Romans say, “Solvitur ambulando”: you figure it out by doing it. There’s no substitute for the insights you gain by trying it different ways. In game design, thinking long and hard isn’t enough. You have to brace yourself for the possibility that some aspect of a current experiment is a dead end. It’s not a waste, it’s a normal part of the process. Educated guesses don’t suffice in such a complex situation.

How do elements like those impact the world setting?

We discovered that they risk taking something important away from the “stonepunk” concept. If time travelers bring an SUV, your PCs may soon have the wheel. That’s not inherently bad; the game system handles all tech levels just fine. However, space aliens and other “Anomalies” risk making players feel like pathetic scavengers of other people’s technology. If, instead, the players come up with their own innovations, then they are The Heroes.

For the most part, no. If you really wanted to, you could run a GURPS or Hero System or Pathfinder game set in the Lost Valley and not have to translate some special case rules for abilities the way you would if you were converting, say, “Vampire: the Masquerade”.

The big exception is Cavemaster’s rules for butchering. We take it for granted today that meat can be salted/dried, but back then, it was like making an enormous beacon of delicious odors to attract predators. Once your tribe knows ‘how to smoke meat’, maybe fire keeps some predators at bay, but now you’ve sent up a huge barbecue invitation to human raiders.

Generally, we don’t think tracking inventory meal-by-meal in a tabletop RPG is worth the effort, but in this case, we made an exception. Living on the edge of hunger is a key part of the paleolithic experience.

Would Cavemaster feel like the same game without the Habilis system?

No, not at all. Habilis has a different feel from almost all other games. In most tabletop RPG’s, there’s a “To Hit” mechanic and only one party rolls dice. The other player’s character might influence the die roll with some kind of modifier, but the intuitive perception is generally that some dude is attacking you while you just stand there like a training dummy.

With Habilis, both the attacker and defender are participating by holding up handfuls of stones. Don’t get me wrong; I like traditional RPG mechanics too, but I think this feels a lot more like “fighting”.

As a bonus, because both parties in the exchange can potentially deliver damage, the fights tend to go on half as long. 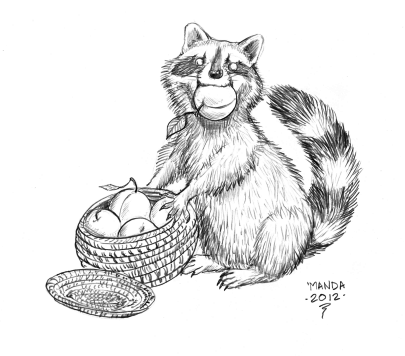 How important is the artwork and illustrations in an RPG when it comes to portraying an engaging setting?

I think it’s very important. I can write, “Raccoons look cute even when they are stealing the supplies on which your life depends.” Or I can draw it.

I used to be of the opinion that “gaming takes place all in the imagination”, but I don’t think that anymore. It was Peter Jackson’s “Lord of the Rings” that changed my mind.

Some folks, when reading Tolkein’s books, all they can envision is hokey cartoon characters. Readers are imaginative but it may be that they’ve simply never seen something dangerous up close– not even a snarling dog. What they’re imagining might not actually be threatening or exciting, even to themself.

Then, along come the artists that Peter Jackson employed, and they show you what an Orc or a Ringwraith can be like. Wow! Suddenly, we’re all on the same page.

Are there any techniques you recommend?

Yeah! Just one. Draw your final picture without the presence of photo reference. Go ahead and draw from pictures for practice, but treat it as training wheels. If you don’t wean yourself off of that addiction to photos, you’re about as valuable as that one program I downloaded on my smartphone for free, the one that converts a photo into something that looks like a sketch. ;) 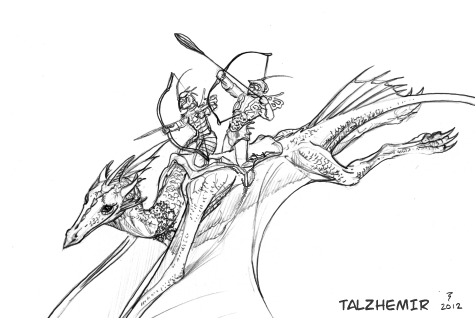 Are there any books, comics, anime, TV shows or films that you would recommend to gamers in order to pick up some setting inspiration for Cavemaster?

On the ‘science’ side, I recommend “Walking with Beasts”, and Scientific American Frontiers’ “Coming into America”, a series with Alan Alda. William E. Wormsley’s “The White Man Will Eat You” will give you a glimpse into just how different a human social structure can be. “Rabbit Proof Fence”, the dramatization of a true story about three girls crossing the Australian Outback, is also inspiring.

On the ‘fun’ side, “Quest for Fire” is ever the quintessential caveman movie. Really, though, any survival-oriented tale might inspire. Try Mel Gibson’s “Apocalypto”,
“Brother Bear” (and “Brother Bear 2”).

How did the development of Cavemaster differ from your work on Quicksilver?

Quicksilver originally included a lot of real-world medieval info. I wanted to reduce the amount of “steel” to the Dark Ages level. Why would they use a 22″ sword and wear no armor? It’s because the primary material was ‘bog iron’. An individual usually owned no more than two pounds of it; it was acquired by digging in peat bogs…where it grew, formed by bacteria. Cool, but…

Eventually, the Quicksilver world became an intriguing combo of “horror” and “comfort fiction”. The “historical” angle had to be taken out because it was “too many notes”, and didn’t add up to the “quaint” or “familiar” sort of feeling I wanted for Seloria.
(By the way, we’re almost done with a Pathfinder conversion for Quicksilver…)

When Cavemaster was written, I held out for putting a lot more authenticity into it. Tabletop gaming books can be very educational, and I wanted that angle, too. So that’s why there’s the bit about ‘amadou’ in Cavemaster. It’s a fungus that makes lighting a fire with flint about as easy and quick as striking a match. It used to be a ubiquitous; Native Americans used it and the famous ‘Ice Man’ Oetzi carried some. Oh, and it stops bleeding. Like bog iron, it’s a lost technology. 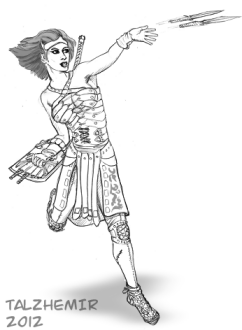 What can you tell Geek Native’s gamers about Bethorm and Tekumel: Empire of the Petal Throne project you’re working on?

In case someone doesn’t happen to know, “Empire of the Petal Throne” was the second RPG to be published by TSR (1975). “Bethorm” is going to be a UNIgames tabletop roleplaying game set in that world.

Ooooh… It’s an exotic place, lush and intricate. Yet, it’s also very accessible, because it draws some inspiration from historical ancient cultures. The people often have a sort of “Old Testament” moral outlook. The technology of the commoners is also very “Old Testament”. Unlike our other games, Tekumel has “mature themes” such as nudity, slavery, demon-summoning, multiple spouse marriages, and frequent ritualized yet brutal warfare (and that’s also pretty Old Testament, too, now that I think about it).

So, I won’t be doing much ‘world building’ because this is the wondrously rich science-fantasy universe created by author and linguistics professor M.A.R. Barker. He wrote a number of Tekumel novels. There are already official guidebooks published describing cultures, sentient aliens, etc. of Tekumel. These will remain valid. Bethorm’s magic system will be true to Professor Barker’s original vision but it’s also streamlined for ease of play.

Jeff and I are passionate about upholding the integrity of the continuity, both in the writing and the visuals. Our work will be submitted to the Tekumel Foundation for approval. This is the organization that oversees the use of the Tekumel license. Besides Habilis, our other “house system” is known as “Pocket Universe”. In Professor Barker’s fictitious language of Tsolyani, ‘bethorm’ means ‘pocket universe’. 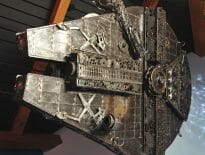 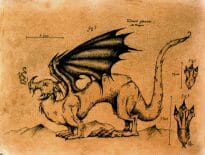 Art Biological mythology in sketches
wpDiscuzComment Author Info
Manage Cookie Consent
This site uses cookies 🍪, and links are ads that may earn bloggers some money 💰, and with this alert, I very much hope that these dark truths 🧌 are acknowledged.
Manage options Manage services Manage vendors Read more about these purposes
Preferences
{title} {title} {title}
Loading Comments...