You are here: Home / Books / Comics / A gun wielding, masked Arab-American? Must be the new Green Lantern

The first Green Lantern Alan Scott made headlines by becoming an openly gay male superhero. It looks like the line will continue the fine trend of fair minded thinking as Sector 2814 produces yet another Green Lantern and the rings go to Simon Baz.

Yes, Green Lantern rings. Two of them but let’s come back to that.

DC’s CCO Geoff Johns, Arab-American himself, told Fox News (of all possible outlets!) of the suspicion that the horrible events of 9/11 have put Arab families living in America under.

“One of the things I really wanted to show was its effect on Simon and his family in a very negative way.”

Baz is a Muslim as well as an Arab-American. We’re yet to see whether that’s something DC draw on as there are some twists already. The new Green Lantern has a tattoo, which reads “courage” but Islamic scholars generally consider perminant tattoos to be wrong or “Haram”. 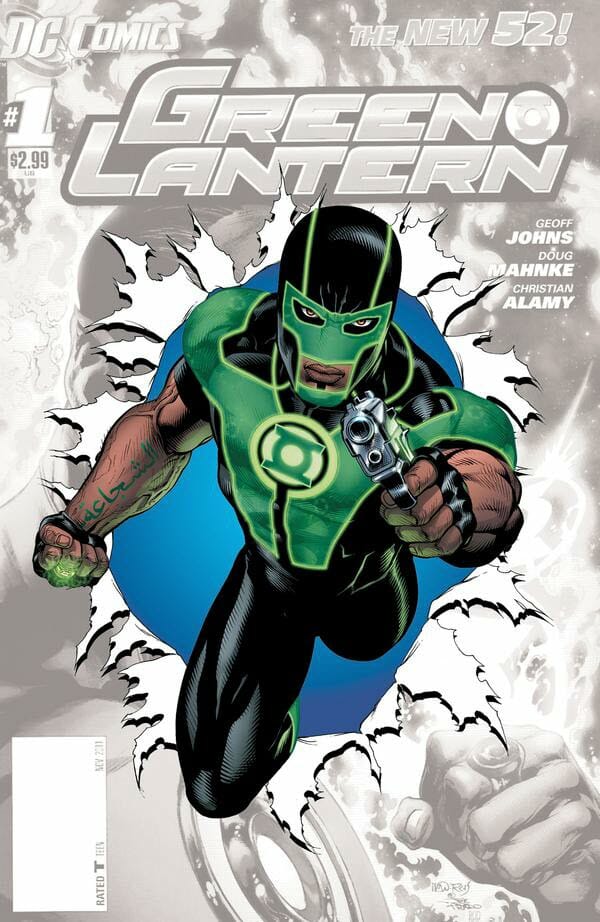 It might also worth be noting that Simon Baz seems to have something of a murky past. He’s resorted to car theft after loosing his job.

So there we have it – DC make the news by creating a gun toting, thuglike Green Lantern, who’s Arab-American and a Muslim. He’s even got two Green Lantern rings.

Oh yes, about those rings…

In Green Lantern Annual #1 we have Hal Jordan and Sinistro fighting against the Black Hand. Things do not work out, the rings report life signs of their Lanterns fail and start to return… but there’s an error.

Comic Vine theorise that these are the likely the rings Baz ends up with. They may even have slightly different behaviour.

A gun wielding, masked Arab-American? Must be the new Green Lantern

Cool Tech Sony Xperia’s “Unleash your music on the w…