You are here: Home / Books / Comics / Review of Charley’s War Volume 10: The End 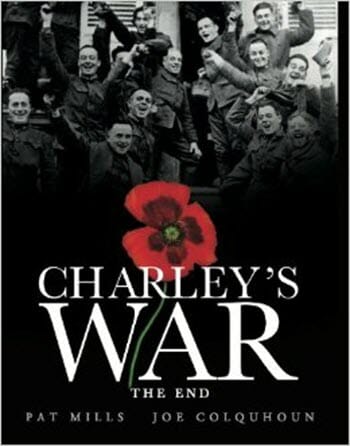 Sometimes starting right at the end is better than not starting at all.

Charley’s War originally ran from 1979 to October 1985. Titan Books started republishing the series in hardback albums back in 2004 and now nearly 10 years later we’re up to volume 10. As it happens it’s “Charley’s War: The End” that I finally discover the series and take a look.

The first name that leaps off the cover of Charley’s War: The End is “Pat Mills”. Yes, that Pat Mills. We’re talking about the guy who co-created 2000 AD, had that level of influence on Judge Dredd (editor) and co-created Slaine along with Angela Kincaid.

The other equally important name is Joe Colquhoun, the legendary British comic book artist who was the first to draw Roy of the Rovers.

I know my World War I history well enough not to be daunted by digging into Charley’s War. I was expecting drama from the trenches. The hardback is better designed than that and actually begins with a super easy to read, one page timeline catch up of what’s happened before. I very quickly got clued up into the names that matter, the events that have shaped Charley’s War so far. As a result of this nice touch I was able just to dive straight into The End.

It’s easy to see why Charley’s War is still be printed after all these years and why it is considered to be a notable work from both Colquhoun and Pat Mills. The comic book, drawn in powerful black and white, does a scarily good job of portraying the chaos of the War.

You don’t need to be one of the gaming geeks who can name the significant battles in World War 1, name the weapons and vehicles used to enjoy Charley’s War. In fact, what Charley’s War does so well is to take the inhumanity of it all and make it feel entirely human. That said; if you are a bit of history buff then this series will certainly speak to you.

So is it worth grabbing a copy of Charley’s War: The End as a way to see if you should buy the rest of the series? It’s certainly possible! Sure, there are spoilers but even with them in place I’m still curious to see exactly how events played out.

If “comic book” means caped superheroes battling alien robots then Charley’s War might be bit too much of a stretch for you. This series has more gravitas than most. 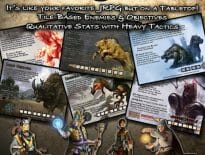 Tabletop & RPGs Check out the Mazaki No Fantaji Role-Playing Game…