You are here: Home / Movies / This is the sound at the end of the Prometheus trailer

The web is abuzz for the trailer of Ridley Scott’s Prometheus.

The film started life as a prequel to Alien. That notion was then dismissed and denied by 20th Century Fox. Then it became a film in the same universe as Alien – sharing “strands of Alien’s DNA”.

Certainly, when you watch the Prometheus trailer you might well recognise the big “gun chair” as a scene from Alien.

There’s another tell, though, right at the end there’s a strange sound.

We’ve heard that sound before. Watch the (rather old) trailer below and by the time you’re 60 seconds into it – you’ll be hearing it again. Often.

My colleague says that it sounds like an alarm sound (mixed with a scream) from one of the previous films… but either way it makes for a good disconcerting “beat” to a horror film trailer.

The same sound is on the Alien quadrilogy (9 DVD set) if your watching one of the featurettes on Disk 8, Alien Resurrection

So that’s what the creepy sound was…

(I really need to watch Alien.)

This is the sound at the end of the Prometheus trailer 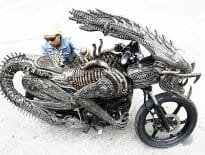 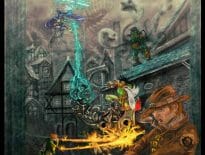