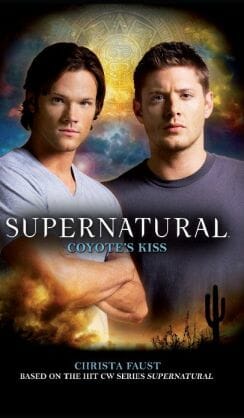 Supernatural: Coyote’s Kiss is a Supernatural novel from Christa Faust that takes place in season six between the TV episodes “Caged Heat” and “Appointment in Samara”. If you’re not that far into your Supernatural experience then the rest of this review contains spoilers.

The most significant part of the mythos for Coyote’s Kiss to make sense, given its placement between “Caged Heat” and “Appointment in Samara” is that Sam is still without a soul.

The plot is straight forward with a twist. There’s a monster from Mexican mythology on the prowl, murdering people by the border and so Sam and Dean get involved. This time, though, they’re not alone as there’s also a Mexican hunter on the trial of the paranormal peril. Supernatural episodes that feature other hunters fall cleanly into two camps; worse than average and better than average – I’ve not known one to be safely average.

Coyote’s Kiss is better than average. It benefits from the extra characters. Xochi, the Mexican hunter, is a work of art and fantastically suited to enter Dean and Sam’s lives. I suspect Xochi may have been a character that only Christa Faust could have created.

There is a twist in the plot. One of Supernatural’s strengths, I think, is that there are often no twists. Monster hunting is a dangerous, arcane but frequently uncomplicated activity. When there is a complication, therefore, it carries that much extra weight. The twist in Coyote’s Kiss is foreshadowed or at least teased and still manages to up the game at the last minute.

In particular, Coyote’s Kiss works with the soulless Sam in a way that I’ve yet to see the TV series do. There’s a nod to the god story in the mythology in Coyote’s Kiss and it’s a good one. It puts some perceptive around the entire series and yet does not steal thunder from the TV show. In many ways I thought Coyote’s Kiss was more of a series finale than the season six series finale was in terms of wrapping up “why” and yet hinting at more to come.

I enjoyed Coyote’s Kiss and read it quickly. This surprised me. I’m always ready to assume the worst when someone pushes out a franchise book but Faust makes it work and Coyote’s Kiss appropriately adds to Supernatural in a way that fans will enjoy.

Disclaimer: A copy of Coyote’s Kiss was provided for this review.