Joey Esposito is a respected name in the comic world. He’s currently the Comics Editor at IGN Entertainment and has a past that features positions such as Comics Editor at CraveOline and contributor to the likes of Broken Frontier.

Esposito also has a history in internet marketing, working out strategies to promote products and services over the internet including social media. This last bit is important as Joey and artist Jonathan Moore have turned to the crowdfunding platform Kickstarter to raise money for their own comic.

Geek Native’s had a look at issue one and whisked together a quick Footprints review in March. If you wish to discover more or perhaps pledge some money (for perks in return) then check out the Footprints Kickstarter page.

As a follow up to the review Joey very kindly agreed to an interview. So! Here goes!

Q. How did Jonathan and yourself wind up raising money for your own comic book? Did you both have a creative itch that you needed to scratch?

Working! Before going to IGN I had two full-time jobs in addition to various freelance writing work. Footprints #1 is 100% money from my pocket, and I’m not sure people realize just how much that costs. Between paying your artists (that’s pencils, inks, colors, letters), getting to conventions, travel, printing, promotion, etc., it’s a lot of freakin’ money. That said, if I’m passionate about something, I don’t care about dumping money into it because I know it’ll be successful in one way or another. I’m very proud of our first issue, and I hope that Kickstarter helps us to bring you the rest! Besides, what would’ve I used that money for if not my own comic book? Other people’s comics, most likely.

Q. Was it hard to come up with Kickstarter idea? Have you seen other authors, artists and comic book insiders successfully raise funds in this way?

A while back, I found Kickstarter through an organization called Reading With Pictures that was using the site to fund their anthology to benefit their program. RWP is a non-profit that focuses on getting kids to use comics to encourage reading and the anthology was an initiative to get comics into schools for educational purposes. And the end product is great. For $20, I got a signed hardcover version of the anthology that features a lot of great cartoonists, and the satisfaction of knowing that I helped this project come to fruition.

And that’s just a small example. There are tons of great success stories from Kickstarter, large and small. And not just in comics. If you’re looking for the small dash of optimism that is left in the human race, it’s all on Kickstarter. Everyone involved is there to help each other out and achieve their goals. It’s awesome.

Q. Have you found your digital marketing background useful for this project? Has it helped you move forward?

I’m not sure I have a “background” in it. I used to do e-commerce for a toy retailer, which included some video production and the social media aspects and all that fun stuff. But in general, yeah, I think social media and the web is our greatest asset. Without it, crowdsourcing would be impossible. But everything about this book has roots in the web; from hooking up with my artists to promotion to printing. It’s great.

Q. Footprints make use of cryptids – that’s to say those sorts of monsters that stalk urban myth and folklore to this day. Are you going to end up wrestling with this? Is there a danger that the series will be reduced to; “Hey! Look! A talking Megalodon!”?

I think I did wrestle with it in the beginning, and hopefully I kicked its ass. I know pitching it to a few of my writing buddies they sort of scoffed at it at first, but I think I showed that something like this can be done seriously while still tongue-in-cheek. My focus is just to put characterization first and the fact that they are monsters second. It’s a dangerous dance to be sure, and some people aren’t fond of it, but hopefully people can look beyond the book at its most basic level and really dig into it. I’m not saying its incredibly deep or anything, but hopefully if you crack open Footprints you’ll find yourself more interested in the background of this team than the fact that they are totally sweet monsters.

Q. How hard was it to pick the cryptids you wanted to feature in Footprints? Did the plot suggest them or did you start with a wishlist and write for them?

Oh, it was easy! I knew that Bigfoot was front and center, but the rest of the characters all fit into certain archetypes of the genre. So that’s how I picked them really, in a way that their perceived personalities — or the way that I perceive them I guess — fit into the kinds of characters I wanted them to be. For example, I wanted a hapless, ill-spoken, macho sidekick. For that, I had Jersey Devil. I needed a muscle character that’s light on words, and I went with Chupacabra. There’s a femme fatale in there of course, but that’s yet to be revealed…

Q. Do people under estimate the effort required to publish a comic book?

Maybe, I’m not really sure. I can only speak for myself. I wouldn’t say I underestimated, but I definitely realized how much work is involved and how endlessly you’ll find yourself talking about it and putting yourself out there. That said, I learned a lot about a side of the industry that I hadn’t experienced before, and I love every second of it. While it’d sure be nice to have the backing of a publisher to help with certain things, there’s something to be said about figuring it out on your own, learning from your mistakes, and doing it better next time. Comics is such an amazing medium and I just want to experience it from every angle.

Q. Is the comic industry coping with the growth of the internet and social networking? Do you think there’s a future for sites like Graphic.ly? Who’s doing particularly well?

Things like Graphicly ARE the future. I love digital comics, but Graphicly in particular. They nailed the social aspect of comics with the digital format. For my money, Graphicly is the best at the digital comics game right now. Unfortunately, they are only a third party; it’s the publishers that needs to step up their game. As we get further into it, day-and-date is getting more and more important, and the publishers need to get ahead of the game for once, instead of catching up.

And we’ll get there. But there is a mentality from some less… forward thinking individuals. Claiming that digital and web comics are somehow less valuable than print. Fear of change, fear of becoming irrelevant, maybe? It’s frustrating, but there are people that see digital comics as a detriment. This is the kind of thinking that needs to go away forever.

Q. What tips would you give to anyone looking to follow Jonathan and yourself with a Kickstarter comic book project?

Do it! But prepared to work your ass off and beg for attention. You’ve got to shove it down people’s throats until they have no choice but to give it a look. And make sure that once they do, it’s something that’s worth their while. I guess that’s my biggest piece of advice: be prepared. Don’t go into a Kickstarter with a lofty goal and nothing to offer or work to show. And be active on social media.

Q. Are you willing to give us any clues in the direction Footprints might go if the Kickstarter project is successful?

Well, we’ll get to see more of the history between Bigfoot and Yeti, and just who the hell they are dealing with. The second issue opens the night that World War II ended. There’s also waffles. 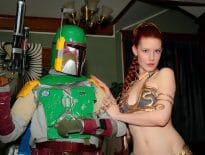