This is Audio EXP for the 1st of October 2022, and the title of this episode is “The One”.

[The following is a transcript of Audio EXP: #166]

Dapper Rabbit doesn’t know they’ve been voted in, as it’s just gone October 1st. I only tallied up the votes this morning. However, I can’t hang around as it takes a good while to arrange and complete the Q&A, and I hope I can land one with them. So, I better tell them soon.

If you are a patron, then you’re an awesome person. The contribution you make goes to me paying for art and writing; it goes back into the hobby. It’s not spent on tech costs, but I have a plan, which I’ll mention later.

Also, if you are a patron, you can vote for November’s spotlight. You can nominate someone for December too.

The five candidates are;

Also in game news, did you know there’s a Labyrinth version of Cluedo? In the game, you explore the Labyrinth.

Cluedo is called Clue in Noth America, adapting the name from the British 1950 version. Wikipedia doesn’t tell me why but does say there were some post-war changes to it, and in the States, it was marketed as The Great New Sherlock Homes Game for a while.

Here’s another ‘did you know’ but did you know Amazon is changing how ebook refunds work. It’s all because of a stunt on TikTok.

The book readers of TikTok, sometimes known as BookTok, challenged each other to speed read a book and return it before the time-limit to do so run out.

I see the attraction. Speed reading is a skill I wish I had and if I could, I’d certainly be reading a lot more.

I think there was also a whiff of sticking it to Amazon, that corporate giant, in the BookTok challenge.

Except, it wasn’t Amazon losing out; it was the authors. And they complained.

Amazon’s sensible response was to change the refund rules so that you can ask for a refund if you’ve not read more than 10% of the book.

I imagine some books are still at risk. Recipes, poems or even random tables for RPGs might be plunderable without crossing the 10% mark. Will that happen? I’m not sure. I think people will find a way to exploit things, but I’m not sure BookTok wants authors to suffer.

Now, the title of this podcast isn’t 10%. It’s The One, and the first one story is coming up, and it’s another book called Onepiece.

You may well think of the anime and manga One Piece. The book is one word, the manga two; however, the book is really inspired by the manga.

Created by Ilan Manouach, a name I’ve no idea how to pronounce, this OnePiece is the largest book in the world and comes in at 21,540 pages. That’s 17KG. It costs nearly €2,000, only fifty copies were made, and they’ve sold out.

There’s another big ‘The One’ story which is One D&D. That’s in the news this week with the latest section of the playtest unlocking.

Wizards of the Coast are making good use of their new D&D Beyond platform for it, using that site, not Wizards, to run and manage files. They’re also making plenty of video content to walk people through their thoughts.

I think it’s a great way to close the gap between the playtest and people, to make it feel more real and personal to people. When One D&D comes out, many gamers will feel they contributed to it, and that’s a great community strategy and a marketing one.

In Routinely Itemised this week, I included some One D&D coverage from The Guardian. This wasn’t a D&D is popular now story, or even just a D&D movie is coming – though it was that. It’s also about just how much financial clout D&D has these days.

I think Hasbro’s purchase of the movie company eOne had some shade. The lockdown and terrible impact on movies is, of course, a big factor there. The D&D movie with Chris Pine, though, will be eOne’s first big Hasbro challenge, and I think it holds its own future in its hands.

The bad, terrible news from the Guardian article is the discovery the British idiot minister Michael Gove is a gamer.

There is another The One, though. There’s The One Ring, and that’s the official Lord of the Rings RPG, now in its second edition, taking pre-orders for the 5e version called The Lord of the Rings Roleplaying. You might think it would sell like hot cakes during Amazon’s premiere of the Rings of Power.

Well, it sold out. I got to speak to Free League boss and co-founder Tomas Harenstam; a written Q&A is my preference, and he admitted they didn’t print enough.

I put the pointed question to him because I know British retailers have been telling me the game is hard to get. It’s not just The One Ring, though; it’s most RPGs, and my sense was the problem is with distribution middlemen. That’s not the vibe I got from Tomas, who reassured me warehouses have books like Vaesen.

It’s not all big publishers in the news this week, though. Let’s quickly talk about Isolation Games who are kickstarting a printed version of When the Moon Hangs Low.

That’s a gothic adventure, already a strong selling PDF RPG, and for Geek Native Rob Leigh put together 25 tracks of appropriate background music. So, if you’re running a spooky Halloween RPG this month, check that post out, as the Spotify playlist is really handy.

Right, I did mention something about money and tech costs. Geek Native runs a Redbubble store. It’s not big. I think I can still count on my fingers the sales I’ve managed, but I live in hope.

This week, assisted by human artists, enabled my AI tools, I launched the Apparatus Cerebrum. That’s a six-piece collection of designs across many dozens of products.

So, if you want a pumpkin assassin on a t-shirt, a sketchy dragon mug, a cute crayon monster, a comic strip panel mini-skirt, a spooky plant lich mask or sigils of occult power on your dog bowl, then check it out. Oh, there’s Eggbot too.

And yes, I did say sigils of occult power on your dog bowl. It’s the natural place for them!

I’ve had a typically busy week this week, with a trip to Glasgow for a gig, but before I get to the usual outro of freebies and bundles, I want to quickly mention the anime Inu-oh. I was lucky enough to catch it on a big screen after the Glasgow-based Anime Limited kindly put it there.

It’s a hard-hitting, stylish anime about forgotten stories and their power, and it’s not a ninja cat-girl anime. I recommend it if you’re a storytelling fan, even if you can’t usually stand the twang of the biwas.

Now, in bundles, there are two from Modiphius on the Bundle of Holding for the Corvus Belli-influenced Infinity RPG.

If you’re very quick there’s a flash sale for Psi-Punk the Fudge-powered sci-fi game from Accessible Games. That sale is on at the same time as this weekend’s Everyone-Games online expo.

Humble has a book bundle for Tolkien. That’s books about him and books that inspired him, rather than another copy of The Lord of the Rings, which you may not need.

In freebies, Modiphius has released the 8th Star Trek Adventures: Briefs with Spacewrecks. We’re up to about 100-pages of free content from that series. Pretty impressive.

There’s also the good-looking but not-yet-playtested by me Extinction Punk from Quickphix CLub. That’s 117-pages of Pay What You Want but tagged with a zero bucks recommended price.

On that cheerful note, I’ll wrap there, keep safe, and I’ll see you next week. 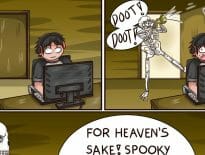 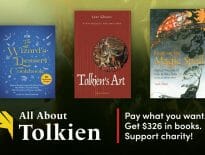