You are here: Home / Games / Tabletop & RPGs / Against the Faerie Queene: Welsh folklore for 5e and Legends of Avallen

There are new Celtic subclasses and an epic campaign in Against the Faerie Queene. The asking price for the campaign to succeed looks high, £15,000, but it’s nearly there with just about £13,000 on the opening day. You can find out more below or on Kickstarter.

The successful Kickstarter will mean;

Modiphius picked up Legends of Avallen and are helping out again.

An ancient island at the edge of an insatiable empire.

Avallen is a storied setting abound with myths, secrets, and adventure inspired by Celtic mythology in Roman Britain.

Quest through the fierce but divided Vallic clan lands, step onto the gilded streets of the Raxian empire, and fall into the entrancing otherworld…but take care dealing with both the fae and demons born there.

The many realms of avallen are filled with astounding locales to explore, wondrous treasures to find, and terrifying monsters to slay-all inspired by Celtic legends and folklore.

You can support the Kickstarter in the usual way but a pledge of £17 is enough to get the foil power cards for Against the Faerie Queene.

At £22, you get the Against the Faerie Queene PDF instead and a thank you.

The hardcover, thanks and PDF are combined at the £45 pledge tier.

The art book looks great and will be available as a PDF. It and the core Legends of Avallen PDF join the Queene in the £60 tier.

At the not-trivial £115 mark you get the cards, the hardback of Against the Faerie Queen, Legends of Avallen and the art book as well as there PDFs and the cards.

The £250 tier is limited in number, getting you named in the campaign and more cards. The £850 adds even more and a character illustration.

The team estimate delivery of June 2023.

Against the Faerie Queene: Welsh folklore for 5e and Legends of Avallen 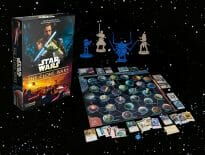 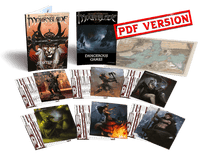