French publisher Le Département are Kickstarting Elric: Rise of the Young Kingdoms, the official board game of Michael Moorcock’s novels.

Mournblade is the official tabletop RPG for Moorcock’s grim fantasy, and it’s not new. Le Département has been publishing the game in French.

Now, bundled into the Kickstarter, there’s an English version in PDF.

Immerse yourself in the dark fantasy world of Elric and his soul eating Black Sword : Stormbringer. This starter set gets you playing Mournblade using the CYD system designed and tailored for an exciting gaming experience in the world of Elric of Melniboné. Roleplay as a Chosen, a Champion of Law or Chaos. You have been chosen by the Lords of the Higher Worlds to serve their designs !

What do you get in this initial book?

Le Département has plans to release Mournblade into retail. They say they’ll release the whole collection. When? They’ll only say “soon” but you can buy it as an add-on for €10 through Kickstarter with a November release date. 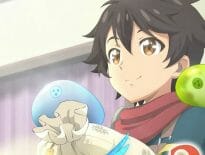