You are here: Home / Games / Tabletop & RPGs / Become a… Legends of Avallen review

I’ve had a PDF copy of Legends of Avallen for a while. I’m not the only one; it’s a silver bestseller at DriveThruRPG. No RPG hits that level without being good.

As I understand it, though, the Modiphius distribution team are about to ramp up the physical book logistics in the USA and so the Celtic-fantasy themed RPG is about to get a bigger audience.

It feels like a good time for a review. It’s also the month I finished my first Legends of Avallen mini-campaign, having played through only some one-shots beforehand.

Truthfully, Legends of Avallen does not suit one-shots. This is an RPG about starting out as a commoner and becoming a legend, and that takes time.

My first thought is about paper, but that’s only because the hardback is new to me and I’m used to the PDF. Let me instead bullet point what I think you’ll find interesting about Legends of Avallen.

At the core, you have four stats; Vigour and Agility (both physical, Hearts and Diamond on the playing cards) plus Spirit and Wits (mental, Spades and Clubs).

To complete a test, there are low modifiers, and you draw a card to determine the result. If it’s a royal card (Jack, Queen, etc.) then it’s double; otherwise, it’s a single. Should the draw match the stat you’re testing, it helps, but if it’s the opposite (as determined by a table (Wits/Spades is the opposite of Vigour/Hearts)), then it’s a negative.

You use Jokers, which are worth +/-4 and (funny how this becomes a big debate for the RPG) you need a way to determine whether it’s a black Joker or a red one.

I like this approach more than any other card-based system I’ve used. It’s not about interrupting the meaning of the cards. It’s about getting a 1, hopefully positive, and with the chance of a larger impact. The curve works.

The other review-worthy highlight in Legends of Avallen’s system is Supplies / Inventory. In that, it matters.

The game’s good looking character sheets even have spaces for Large, Medium or Small items. Before you have a Class your character, that commoner from a village, will have a profession and likely a set of equipment needed to actually use the skills of that profession.

Normally I’d moan about inventory in a tabletop RPG as unnecessary bean-counting, and it works in Legends of Avallen. It works because you start off as a not-yet-a-hero in which a few trinkets are important and, Gods willing, end up as a legend in which carrying the Holy Relic becomes significant.

The inventory/supplies system matters. In my Legends of Avallen games, I was doing two things constantly; making sure I had a horse to ride and help carry stuff and planning routes so that I could resupply.

The whole point of the game is to start off a fantasy commoner and become a legend in a world influenced by magic-using Romans.

Okay, in more detail then. Legends of Avallen succeeds because of its light touch but is directional in its mechanics. I think it’s a bit like jumping down a flume in a water arcade. The experience never feels like a high-security expedition; you’re hanging around in your bathing suit chatting with others in the same situation as you. You’re directed into a tube in the spirit of “having fun”.

The result, all being well, is a fast track into the pool. In this case, if you avoid Death, the pool is a legendary success. ]

Now is Legends like that? The setting never feels like a high-security expedition, you don’t feel like you’re being marshalled strictly. It always feels fun. Nevertheless, playing in the game builds the setting as inescapably as joining the flume queue takes you to the pool.

The game succeeds (and easily) with the Celtic / Roman theme with the background options given to the characters.

Legends of Avallen is a world where magic is real and absolute. Magic from the gods is the final end and be all. There’s nothing else.

Until there is. The Raxian (Roman) Empire arrives, and despite all the odds, they seem to be as powerful as the Gods, and they have their own magic.

This isn’t a right/wrong debate, nor isn’t an anti-imperial or anti-colonial RPG. Heroes can be Raxian, but Legends of Avallen is built on the juxtaposition of the empire and the old gods.

Legends of Avallen look and feel

I mentioned the paper, right?

Well, I got Legends of Avallen at the same time as a Kickstarter that I won’t name, and the contrast was impressive.

The unnamed Kickstarter was disappointingly light on art. The page count was similar, but the art tally was about 20:1. That’s to say, Legends of Avallen often has art, but this big budget, big company, Kickstarter rarely did. LoA uses illustrations well, which I hope the photographs in this review show. Sometimes there are high impact page spreads with white text. Sometimes provocative embeds with the game flowing around them.

As a result, I’ve spent more time thinking about paper thickness than humanly wise. I conclude that Legends of Avallen is good enough but not ideal, and it may not be suitable because of unnatural perceptions influenced by Kickstarter. It means I’ll keep using my PDF for checking notes and rules during play, which I suspect many other gamers do these days too.

Honestly, this feels like an impossible conclusion to reach.

Why? Well, pick another fantasy-Roman card-based RPG that takes you from commoner to legend? Is it better or worse than Legends of Avallen?

It seems unlikely that you could. LoA seems pretty unique, or at least dominant in this theme/niche/style. So, in practice, it feels like the question should be whether you want a sexily clad bathing suit attendant to direct you to the only flume you’re interested in. a non-5e game set in a mystical Island with old Gods and a new empire. If so; yeah, durr, Legends of Avallen it is.

Me? I’m very glad I have the game. I don’t want any observations about paper quality overshadowing the success of the RPG at all. I’ve loads of roleplaying material on my shelves, but only one that feels like Legends of Avallen.

Disclosure: My hardback copy of Legends of Avallen was provided for review.

Become a… Legends of Avallen review 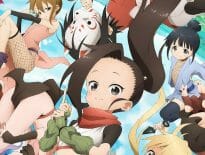 Anime Cute, creepy or intense: In the Heart of Kunoichi … 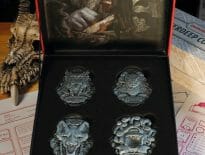