What if a pandemic swept through the Star Wars universe?

The mashup of Star Wars from the Clone Wars era and that topical hit Pandemic has happened. You just can’t play it yet, but Zavvi is taking pre-orders.

In the game, the Republic’s Grand Army is locked in a battle with apparently endless droid battalions sent by the dark Count Dooku. It’s the droids, not germs, which are the pandemic threatening to overrun the galaxy.

As Jedi, players have different options to stand against the droid swam, have missions to complete and villains to face.

The game comes with four different scenarios, each with a different villain to thwart. The game uses a large board, Star Wars art-rich cards and minis.

Z-Man Games, the Asmodee studio behind the Pandemic range, say;

Traverse the Star Wars galaxy with your fellow Jedi as you battle the droid armies of Count Dooku and the Separatist Alliance. Utilizing the familiar team based mechanics of the Pandemic System, Star Wars™: The Clone Wars, a game by Z-Man Games and Asmodee, drops you into the heart of this galactic conflict. Move from planet to planet fighting battle droids, slipping past blockades, completing missions, and facing off against legendary villains.

The game is expected to be released in October. 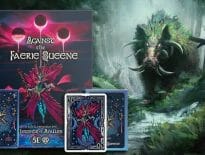