Disney held their D23 Expo this weekend with a geeky shedload of trailers and news. In this Uncommonly Itemised wrap-up, you’ll find a summary of the teasers and trailers released.

We’ll feature both Andor and Secret Invasion here for completeness, although both had standalone posts on Geek Native.

Werewolf by Night is due out on Disney+ on October 7th. In the special, Jack Russell is descended from lycanthropic ancestors. Nonetheless, he knows of his changes and commands his formidable werewolf body to confront evildoers.

The series is a prequel to the Star Wars spin-off film Rogue One (2016), and it follows thief-turned-Rebel spy Cassian Andor five years before the film’s events.

Star Wars: Tales of the Jedi

Willow premieres on Disney+ on November 30th with Warwick Davis. Christian Slater’s casting was a surprise, and he termed the job “a dream come true,” although we don’t know much about his “fun” character.

Quantumania footage won’t be online. At least Randall Park will return as Agent Jimmy Woo. Ant-Man and The Wasp: Quantumania is a “direct line” to Phase 5 and Avengers: The Kang Dynasty, said Feige. Kang asks Ant-Man if he’s killed him before as all of the Avengers he’s killed melt together.

Loki is back at the TVA, but nobody recognises him, and he keeps time glitching. Tom Hiddleston attended D23 Expo, and Loki will be the first MCU series to get a second series at Disney+. The crowd also watched the first video of Everything Everywhere All At Once actor Ke Huy Quan, who joins the cast.

“To bring Fisk and Maya back together again was just a thrill… we had some crazy scenes,” D’Onofrio hinted.

D’Onofrio had more to say, staying on the set for Daredevil: Born Again, where he was joined by Charlie Cox. D23 didn’t show any footage from that show but did reveal another Disney+ series currently streaming where Devildevil will make an appearance.

Tim Blake Nelson’s comeback as The Leader in Captain America: New World Order is a bit of a surprise appearance and is his first since The Incredible Hulk. Danny Ramirez will return as Joaquin Torres, Carl Lumbly will return as Isaiah Bradley, and Shira Haas will play Israeli superheroine Sabra.

In The Marvels trailer, “We’re a team!” Kamala insists, but Carol replies: “No, no no, we’re not a team!” as the three leads keep switching places in the galaxy.

For Star Wars, season 2 of The Bad Batch is confirmed to be 16 episodes starting on January 4th next year.

Jude Law made an appearance to support Star Wars: Skeleton Crew set in the High Republic. It’ll be directed by Spider-Man’s Jon Watts. Law said, “I can’t quite believe I’m part of this galaxy”.

James Mangold previewed Indiana Jones 5.  D23 attendees saw an exclusive video of John Rhys-Davies as Sallah. The clip closes with a variation on an iconic Indy gag as he whips gangsters who shoot at him.

The Disney Studios panel ended with Avatar: The Way of Water as James Cameron live-streamed from New Zealand, where he’s filming Avatar 4. Those in attendance were shown clips from the sequel, but we’ll have to wait to see them when the movie opens in cinemas at the end of the year. 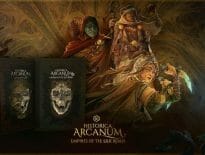 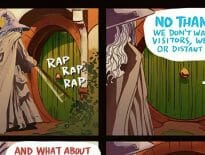