Brian Sago’s on Kickstarter with a tabletop RPG about a doomed dairy heist at the Minnesota State Fair.

Butter Princess has attracted over 100 backers, smashing the funding target as people are lured in by this combination of dice, comedy and horror. You can find out more on the pitch page.

Imagine a game based around a 90-pound butter sculpture. Brian Sago can and asks;

Who among you will glide away with this blue-ribbon MacGuffin of the Northwoods? And who will be caught forever in the churn of farm animals, deep-fried food, and armpit-to-armpit humanity?

The game suits 2 to 5 players looking for some laughs and an escape from dragons.

Perhaps unexpectedly, the rules are based on Trophy Dark, but you don’t need that RPG to play. This means your characters are unlikely to survive their trip to the State Fair, and your goal is to lose dramatically.

A pledge of $10 is enough to support the project and be in line for a PDF copy of the game.

At $19, but shipping only to the United States, the reward pile is expanded to include a print copy of the pamphlets.

Then, at $90, backers could be sent 5 copies of the game, enough for the group or RPG club, and there’s a limited $600 tier for people who want to play a hosted game.

Butter Princess is slated to ship this September. 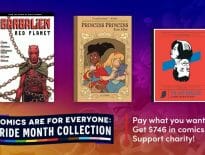