The second promo video for “The Reincarnated Sage’s Alternate World Life: I Got a Second Profession, and Became the Most Powerful in the World” features spell-slinging, silly slimes.

There’s nothing about that which isn’t a mouthful. Yet, it works!

The director of that other long-winded slime anime, I’ve Been Killing Slimes for 300 Years and Maxed Out My Level, is directing this one too.

The story is of Yūji Sano, who works for a Japanese company that’s mean to their employees. Then, while working late, his computer summons him to an alternative world.

Isekai fans will know what happens next – he gets the sage profession and skills. With Sage, he begins to unlock magic and powers. Things took another twist when he followed a slime, which should be a weak creature.

This video highlights the singing of “Gohan da yo! Dadadadan!!” by Surachanzu△. That’s a voice actor troupe who actually plays the slimes in the anime.

Tabletop & RPGs Revealed: The three-page table of contents from Cr… 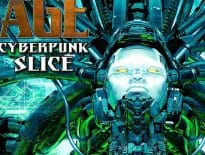 Tabletop & RPGs Cyberpunk Slice is out as The Expanse’s Mode…
wpDiscuzComment Author Info
Manage Cookie Consent
This site uses cookies 🍪, and links are ads that may earn bloggers some money 💰, and with this alert, I very much hope that these dark truths 🧌 are acknowledged.
Manage options Manage services Manage vendors Read more about these purposes
Preferences
{title} {title} {title}
Loading Comments...