You are here: Home / TV / Anime / Ms. Company Slave Wants to be Healed by a Loli Ghost offers a dodgy title for a heartwarming story

“Ms. Company Slave Wants to be Healed by a Loli Ghost” is an anime from Project 9 that adapts Imari Arita’s comedy manga.

The Western use of the word “loli” has become sexualised, somewhat, which unfortunately flavours the title of the anime. However, some commentators argue that the Japanese title uses “youjo”, not loli, which translates better as “little girl”.

In essence, it’s the story of a ghost of a little girl who tries to stop a woman from working herself to death.

That’s a spooky start to the trailer too. Full marks for the turnaround.

The manga is a comedy, has been posted on Twitter since 2019 and picked up by the Monthly Shonen Gangan magazine too.

The official synopsis is;

When Fushihara-san, a company slave, is working at her company until midnight, she hears a voice on the floor, “Leave now~.” The voice comes from a little ghost / Yurei-chan! Yurei-chan wants Fushihara-san to go home for her health, but Fushiara-san doesn’t want to leave because she loves the cuteness of Yurei-chan. This is a heartwarming and cute story woven together by the two (?).

Ms. Company Slave Wants to be Healed by a Loli Ghost offers a dodgy title for a heartwarming story 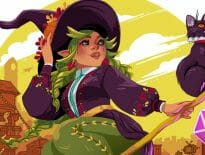