There are four days left on the Small Press Spotlight Sale as this blog post goes live. That’s time enough to get involved and take stock of who the runners and riders are.

First, I think it’s neat that DriveThruRPG is doing this. It’s a good idea. It’s a growing part of the hobby, with alternative platforms available and even more options for buyers. No small press creator gets rich, and they will all feel each and every purchase. As buyers, we get to make a difference.

The search features at DriveThruRPG tell me there are 52,468 qualifying products in the sale! Hard to get noticed, huh? This post is about the top ten sellers, but I’ll also add results from the “highest-rated” filter. I wish there was a way to do random samples.

With half a week to go here’s a lot at which small press titles are doing well with the crowds at the small press sale.

That’s the hot data from the strip across the top of the page. Interesting to see Magpie Games in there. The debate around what counts as “small” is a hot one. I’ll back out now after throwing that cat shape.

DriveThruRPG lets customers rate products from 1 through to 5. It’s not a straightforward system as trolls are a thing, but once a title has a sufficient number of star ratings the poll is a pretty good idea.

If you do a Venn of “Hot” and “Rated” (frankly, sounds a bit Tinderish), then the first title to qualify for both is Flying Circus – Core Rulebook by Newsstand Press. 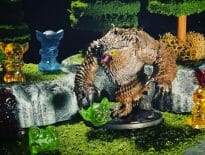