You are here: Home / TV / Anime / English subtitles for the Lupin the Third Part 6 trailer

We’ve the 50th anniversary of Lupin the Third, the manga and anime series that follows the exploits of Gentleman Burglar, Arsene Lupin’s grandson.

Magnetic Press has a Lupin the Third tabletop RPG on the way, and in October, Part 6 of the anime will premiere.

It’s expected that Lupin and friends will go up against Sherlock Holmes in this encounter. Voice actor Masato Obara has been cast in the role, while Akio Otsuka (Batou in the Ghost in The Shell) steps in to voice Daisuke Jigen, replacing 88-year-old Kiyoshi Kobayashi, who has had the role for the last 53 years.

Crunchyroll has the Lupin the Third license in the States, but not here in the UK.

English subtitles for the Lupin the Third Part 6 trailer 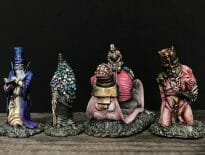