Italian publisher Horrible Guild (who aren’t so horrible, as we’ll find out in a bit) were founded in 2014 by Lorenzo Silva. At launch, they were known as Horrible Games, which, I guess, might have been even more misleading, and they rebranded to Horrible Guild in 2019.

They publish Vampire: The Masquerade Vendetta and other board games like Dungeon Fighter. The latter will give rise to an RPG called One More Quest if the Kickstarter community backs it.

Set in the Dungeon Fighter world of Middlewhere, that’s a fantasy world with lazy overlords, hipster gnomes and reversed sirens, One More Quest has dungeon fighter PCs venture out on dungeon crawls.

It’s a comedy RPG supported by an SDM (Supreme Dungeon Mastermind) who controls the farcical story hooks and monster profiles.

On one level, One More Quest is a typical RPG, but it breaks all the rules on another. The rule-breaking stuff? One More Quest introduces real-world dexterity. In this RPG, you throw dice at things.

Based on the board game mechanics, in One More Quest, when your characters take action, you throw a die so that it lands as close to the centre of the target. As extra challenge (and spectacle), restrictions might be added, such as throwing from under a table or spinning around first.

Unless that is, you use a wheelchair, or prone to being dizzy, or encounter any one of hundreds of different reasons why any sort of physicality in an RPG might be a fun-sucking drain.

I speak from lived experience. I put this question to Horrible Guild (and asked for some art from the game to showcase here) and they had already thought of it.

To be fair, this page (29) says that alternative rules are out of scope for the quickstart, but the Guild takes the time to push for inclusion. They say;

The dexterity-based mechanics in One More Quest are intended to be fun and goofy, to welcome casual gamers who might be put off by more serious or complicated rules. They are certainly not intended to exclude gamers whose disabilities or accessibility requirements might make specific throws painful, embarrassing, or impossible. The designers of this game wholeheartedly encourage SDMs to adjust the ruleset as required to produce a safe and comfortable experience for all gamers at their table.

Acknowledging that accessibility is a thing in the quickstart is a significant win. Although the quickstart says it doesn’t have the space to help with those alternative rules, Horrible Guild do go on to say;

The first step should always be for SDMs and players to communicate with each other and jointly agree on a solution that does not disadvantage disabled players, but preserves an enjoyable level of challenge. For some players, substituting a specific throw requirement with a different one may be sufficient, which is something easily determined by SDMs on-the-fly. Other players may be better served by disregarding the rules for throws entirely, instead using conventional dice or a random number generator app.

You can sign up for the Horrible Guild newsletter for more news and information about the upcoming Kickstarter.

The Kickstarter is expected out in the autumn. 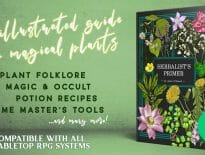