Player characters are Diesels; that’s to say, humans who have been modified by biotechnology to run on diesel!

The RPG, launched today on Kickstarter by Steven Pankotai, promises cinematic action alongside an emotional core. The doors to the campaign have just opened, and you can check out the early backing numbers or join in from the project page.

The campaign, if successful, will fund a rules engine and campaign setting. Diesel takes place on Edge; a desert area on the edge of the known world and reality.

Along this border, a substance known as Possibility forms. Literally crystallized reality, Possibility can warp what’s real and make incredible things possible—things like Diesels. Originally created as instruments of war, Diesels are humans that have been heavily modified and now run on diesel fuel. Every player character is a Diesel living in Edge, but their story and abilities are completely up to you!

How to play Diesel

There are no player classes in the RPG, and each player creates unique characters by picking whichever body modifications they want.

A pledge of $18 will get you a PDF copy, at Kickstarter-exclusive pricing, version of the game. The softcover is added at $25, which is about £18.

If you want a hardback and PDF bundle of the game, then pledge $35.

Higher tiers are available, including a Premiere option for $50, which puts your name in the limelight.

The game, in digital or on paper, is expected to be delivered in August 2021. 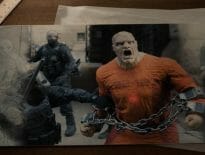