You are here: Home / Games / Tabletop & RPGs / Perfectly balanced noir under the wing of the dragon emperor: A review of Shotguns and Sorcery RPG

Shotguns and Sorcery is a series of novels by Matt Forbeck, which I have not read, and then thanks to a Kickstarter and Outland Entertainment it is also now a Robert J Schwalb designed Cypher System RPG.

It is my favourite Cypher System RPG, although this may be in part due to frustratingly incomplete experiences with previous attempts to settle into a Cypher System game. It is undoubtedly due to the Cypher System’s design and Schwalb’s precision.

In fact, the Cypher System is such a good fit for Shotguns & Sorcery that the game feels like a robust and yet agile strandbeest of parts. A gentle gust of player action is enough to give the game legs and set it walking.

A dark pact was made to save a corner, a single city, from the apocalypse and in Shotguns and Sorcery, the PCs live in the literal shadow of it.

The Ruler of the Dead, the most powerful necromancer this high fantasy world had ever seen, decided it was time to eradicate all life. Her undead army swept the land, crushing all beneath them until they met the survivors who fled to the world’s second most feared nemesis.

The dragon is believed to be the last of his kind. Occasionally the monster would wake, fly from his mountain top and feast on the unwilling and unlucky. But it was this dragon that the survivors came to, and they came to him with a promise; protect them from the undead long enough for them to build a wall, to find safety, and they would willingly serve him. The dragon would become emperor, and the survivors would become his subjects bringing tribute on request.

The game is set decades after the found event. Player characters live in a city of patchwork races, with bristling racial tension, and will usually be from those fantasy races most likely to buck standard behaviour and become an adventurer-explorer.

Common PC races are dwarf, elf, halfling, human or orc. In every sense, the world that was before the Ruler of the World could have been a standard fantasy setting.

Packed behind Dragon City’s walls, with the hungry dead outside, despite the tension, the descendants of those who made the dragon pact have had to innovate. Magic is considered. Technology is advancing. The two operate together in a trapped but largely content civilisation.

You don’t need to own a copy of the Cypher System or any other book to use Shotguns and Sorcery. It’s a standalone RPG.

The GM doesn’t roll dice in this game, when something is going on, then it’s one of the players who has skin in the game and getting to be active. Punching a goblin? Roll the dice. Dodging the goblin’s punch? Roll the dice.

The GM sets the difficulty, and then, like a calculating detective pondering the chances of a betrayal, later on, the player decides how much effort their character wants to put into being successful.

Characters particularly good at certain things need to spend less effort to boost their chances of success or find automatic success, and so moments of cinematic bravery are entirely in the players’ control.

However, despite the possibility of putting enough effort into a scene to ensure an automatic success, there are still times players need to roll dice, and the Cypher System keeps that interesting.

If a player rolls a natural 1, then the GM gets to intrude. Call it a botch or a fumble. If this happens then, the affected player gets 2 XP. The player in question also gets to award 1 XP to someone else and explain why. This is a fantastic rule as it teaches players to consider others and that bad dice do not make for bad games.

Furthermore, if a player is determined not to be foiled by the dice just then, they can spend 1 XP, instead of earning 2, and there is no intrusion.

In Shotguns and Sorcery, characters do not get XP for killing things. They earn experience by discovering things.

On a roll of 17 and it’s a damage-dealing attack then the player does 1 extra point of damage; on an 18 it is 2 extra points.

A natural 19 means the PC has benefited in a small way from a twist of good fortune. On a roll of 20, that unexpected boon is even greater.

So, to recap, it’s always the players rolling the dice. They can spend effort, and learn the effort economy if they want, to remove or reduce dice rolls. However, once the d20 begins to tumble, then the chances are high, something interesting will happen.

Outside the Dragon City

The thing about the PCs is that they’re different from the masses who are largely content to live in the dragon’s shadow and squeezed behind the protective walls. PCs might explore outside.

The rules and introduction to the setting make up about a half of Shotguns and Sorcery’s 276 pages. Information about the world; organisations, beyond the walls, NPCs, magic, artefacts and monsters make up the rest.

There is an unusually large number of named NPCs in Shotguns and Sorcery. The conclusion I leap to is that these are characters from Forbeck’s stories.

It’s worth stressing, I’ve not read the fiction. I can’t comment on whether these NPCs feel like the characters in the books. I can’t even tell you if Shotguns and Sorcery feel like the books, whether Dragon City feels right or there is enough or too little information on the Ruler of the Dead concerning the books.

I just know, and know with confidence, that as a standalone RPG Shotguns and Sorcery is nicely balanced.

The monsters section is strangely transformative. There are a lot of them. The range of high fantasy encounters, both usual and unusual, is high. It’s a reminder that this is a high fantasy game with shotguns. It’s not a gritty low fantasy.

Shotguns and Sorcery is easy to read. Given that it’s been professionally edited (Ellie Ann and Sean Molley) as well as being written by veteran Robert Schwalb and then with the additional helicopter level inspection by Matt Forbeck, this isn’t a surprise.

The majority of the book is a standard two-column layout, and the text tends to be on the small size (I’m reading it with my Kindle app set to 119%) but large enough for me.

The pages are weathered paper, but not distractingly so.

It’s the art the stands out. There’s a host of artists credited (Allan Gallo, Brian Koschak, Paul Little, Jeremy Mohler, Lee Oaks, Aaron Palsmeier, Andrew Poole and Shannon Potratz) but I would never have guessed. This is a good thing, but to me, it looks like the whole project was illustrated by one artist and in one style.

Most of the time, the comic-book style of thick colours, bold lines and little shadow, works for me. On rare occasion, it feels a bit too simplistic for such a cleverly balanced.

On reflection, I’m puzzled as to why I’ve not seen more buzz about Shotguns and Sorcery. It’s a great RPG.

Feeling a little burnt out of the usual fantasy? Too cautious about trying horror or sci-fi or perhaps there is a player or two in the group that doesn’t want to leave high fantasy behind? Try Shotguns and Sorcery.

The setting is easy to understand and generates plenty of opportunity of adventure; so do the mechanics.

Shotguns and Sorcery is worth your time.

My copy of Shotguns and Sorcery was provided for review.

Perfectly balanced noir under the wing of the dragon emperor: A review of Shotguns and Sorcery RPG 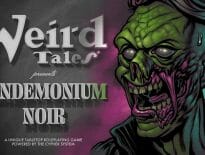 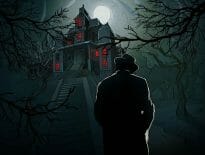