At gaming conventions, you have the chance to buy awesome gaming accessories that you did not know existed and therefore, never knew to look for.

It is at the world’s largest gaming conventions that accessories which didn’t exist the year before are demonstrated to gamers. If there’s been a cool RPG accessory invented, then it will be a show like UK Gaming Expo that it’s revealed at.

Except, this year, many conventions such as the UK Gaming Expo have been cancelled. Not only is this a considerable challenge for the retailers who attend, but it also means you might miss out on the latest goodies.

Geek Native can reveal one of the coolest inventions of the year and give you a chance to win a brightly coloured rainbow pack all for yourself.

The bittray is the invention of All Rolled Up. They’re the gaming that we can thank for those cool printed mats that can be clipped together to make a dice tray. If you do now those folding dice trays, then you’ll understand immediately how the bittray works. Once again, an easy to store or transport mat that can be fastened together to form trays strong enough to hold your meeple, cards, tokens and lots of other McGuffins that accompany board games.

I think the bittray are a cool idea and I had a chance to Fil Baldowski of All Rolled Up about them. I discovered the company has been making PPE equipment for health workers in the COVID-19 crisis as well.

Let’s start with the competition and then get into that conversion with Fil.

To enter the competition, you’ll need to sign in to the widget below. Sorry about that, it’s used to track entries and randomly pick winners. To have a chance of winning, you need to complete the tasks in the widget for points. The more points you have, the more opportunities you have of being picked at random.

One thing, though; please be patient. Winners will be getting one of the first-ever bittrays but to get them to you Geek Native, with All Rolled Up’s help, have to navigate the logistics of shipping goods during the lockdown and so might be a bit slower than usual.

All Rolled Up and the bittray

I hear All Rolled Up have been doing your bit in the battle against COVID-19. What have you been making?

Despite the current situation, it has been business as usual. I have been able to bring supplies home and continue to work on handcrafting our product. We have continued processing the orders that come through the website.

However, this time has also given me the push to create a brand new product, the bittray. I’ve had the concept of the bittray in the back of my mind for a while. We could see from tabletops, in person and from pictures online, that people were buying our dice trays to hold their bits and pieces. We were often asked if we would make smaller trays to hold tokens and such; so, the outcome is bittray.

We were going to have the official launch at UKGE, but now that it has cancelled, we are bringing the release forward. We’ve submitted the bittray for the UKGE Awards so that if they choose to do something virtual, perhaps, we can still get the new product seen.

As well as innovating, we’ve genuinely been doing our bit for the fight against COVID-19 by switching our 3d printer from creating dice towers to making protective visors for our key workers.

The UK’s big tabletop convention the UK Gaming Expo has been cancelled. How has that impacted the company?

While we have a web store, our business model depends on conventions as a way to engage with and sell to customers with the tangible product right there. We’ve attended one convention in 2020; that was in January. Since then, all the events we planned to participate in – like Salute, the Student Nationals, and so forth – have cancelled or rescheduled for later this year/next year. It was sad to hear that UKGE cancelled – it’s our key UK event of the year; but, clearly, Richard and Tony have made the right decision under the circumstance.

Losing those conventions weighs heavy on the business. We would expect to attend 15-20 a year, both big and small. Now, we have to rely on promoting website sales, producing products for Kickstarters and fulfilling special orders. The physical presence at events has always been vital in reaching customers. My husband’s self-published role-playing The Cthulhu Hack – which All Rolled Up distributes – also benefited from the chance to talk to customers and demo the game face-to-face.

We have started participating in virtual conventions. VirtualGrogmeet was our first (https://thegrognardfiles.com/grogmeet-2020/), which ran over the weekend of 17th-19th April. We had the same customer engagement we would expect from a physical con of the same size, so we plan to attend more. What’s great about a virtual con is that we can go global without leaving our home!

We are also working with Fabian Kuchler, of The Kraken convention fame, on another idea. We hope it could help gaming companies promote their business to the wider community in a fun way during lockdown; you’ll have to watch this space.

How badly do you think the tabletop industry will be hurt, if at all, by the lockdown in the long term?

I believe the pandemic and lockdown will hurt the industry tremendously. Though the lockdown might have driven a temporary burst in online sales for games, to keep people occupied, the impact on some customer incomes will lead to fewer sales.

Also, I expect the cancellation of conventions worldwide will have a significant impact on companies that rely on them for the bulk of their income. They’ll either go out of business or be forced to adapt in some way to make up the difference – like the restaurants that have moved solely to takeaway or become fresh food outlets.

Supply chains will also be affected, so expect severe delays and maybe even cancellations of products. As more companies go out of business, it will have a domino effect; suppliers will lose income when companies can’t pay their bills.

We feel lucky at All Rolled Up as we produce most of our product in the UK. Before Brexit rolled in last year, I made a point of stocking up on crucial supplies and raw material in preparation. In a way, Brexit actually helped me to be better prepared for the pandemic.

Bricks and Mortar stores will suffer from the restrictions on opening. Many will still need to pay rent and wages for staff. The UK government furlough program ends in June, so we may see stores tip over into permanent closure. That’s really sad.

Even those stores with an online presence will have to work really hard to promote and sell games. Customers with diminished income will look for the cheapest offers when otherwise they might have opted to support a local store, even if they charge a bit more. Social Media will play a big part in helping those stores survive.

The whole industry will take a knock from which I expect it will prove hard for some to recover. Without a cure or timely availability of immunisation, I would expect large conventions will become a thing of the past.

I love the sound of bittrays! They’re small and discreet when you’re not using them but then colourful and big enough to cope when you need to store tokens, cards and meeple during gameplay. What dimensions are they?

We think the bittray is a great way to organise all your tabletop game bits and pieces, hence the name. Our partner, Custom Patriot, print them and then we assemble and finish them, all right here in the UK.

Laid flat a bittray is 164x94mm; popped up, it’s roughly 100x55x25mm. We designed the bittrays to work together, with two or more holding all your various counters and pieces; but they work fine by themselves.

The bittrays are like miniature versions of our original folding neoprene dice trays, but they have double-sided snaps that allow you to connect and arrange them however you want. You can snap them in a row, a block, or even in a circle that would be perfect for the centre of the table. I tested them using a Lazy Susan, and it worked great. Once finished, you just unsnap them and lay them flat in your game box; or, you can snap them together into a bundle for easy transport in your bag or pocket.

What games have you found that they work particularly well with?

The bittrays will work with any tabletop games that need you to have a lot of pieces to hand. We’ve tried it with games like Terraforming Mars, Wingspan, Gloomhaven, and Agricola. It would also work with miniature games, like X-wing, to organise your tokens. Just recently, we played a lockdown game of Isle of Cats, which has a whole bunch of pieces for fish and different coloured cats. The bittray worked perfectly, with each holding a different colour token in a row of trays at the side of the table.

When and where can people buy them?

Our initial release will be the seven rainbow colours, available in sets of either five or seven. You’ll be able to pick and mix your bundles.

Soon after that, and already on the presses, will be themed trays – a surface of Mars print, skulls, tentacles, and some space images. We plan to acquire – and may commission – art and print more bittray themed to more game genres. As we’ve done with our game rolls and folding dice trays, we hope to work with game companies to produce game-specific licensed bittrays.

We will announce the first release through the Board Game group on Facebook. We plan to have a competition for people to win a couple of complete sets. We will have them for sale shortly after that on our website at AllRolledUp.co.uk. We’re happy to ship worldwide, and they’re packaged in eco-friendly recyclable paper bags. Once things start to improve retail wise, they will also be available to purchase in-store and online at Patriot Games in Sheffield UK.

Monopoly will always be my favourite board game.

Lucky for you, bittrays work perfectly for keeping your houses and hotels stored, while an All Rolled Up folding dice tray will keep the dice from scattering all the carefully laid property on the board.

I would love to have the trivial pursuit ‘Friends’ version

What a fantastic opportunity to own some quality made items.

It’s my Birthday tomorrow and the Monsters and Minions expansion for Roll Player is on my wants list!

I’d go for Pirate Tricks board game, me heartys.

I’ve heard good things about Talisman and you have the updated 4th edition.

I like the look of outfoxed! It has adorable illustrations on the box and the idea of the game sounds fun. Solving a mystery and gathering clues sounds awesome and my sons would love it.

Forbidden Island Board Game looks like our kind of fun.

Love a bit of Cluedo.

I would love a chess set of connect 4

It would be Game of Thrones Collector’s Chess Set. 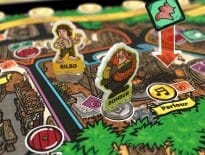 Tabletop & RPGs An Unexpected Party: Weta to release a new The Hob… 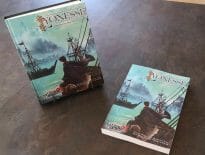