You are here: Home / Geek Stuff / What I learned by taking my 8 month old son to Comic Con

I’ve gone to the San Diego Comic Con every year since 2005. My husband has been going since 1999. We’ve gone together every year since we met in 2007, including when I was five months pregnant last year. So now that we have a son, there was no question that he was going to come with us. That being said, we were both a little unsure of how things would go, given that we still hadn’t even taken little Rigby out to dinner. We knew the experience would be a challenge, but would it also be a nightmare? We weren’t sure. But we were sure it would be a learning experience and boy were we right! Here are some of the many things we learned: 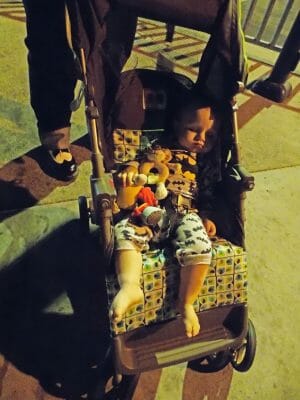 There is No Benefit to Choosing Between a Stroller or Carrier

Some babies love carriers. Others love strollers. Some babies can use either one all day and be totally content. If your baby doesn’t like being left in a stroller or carrier for too long though, it’s better to bring both. It might seem like a lot, but we tried just the stroller on preview night and he didn’t like being surrounded by so many strangers while he was sitting so low. The next day we tried just the carrier and not only did our backs ache from carrying him (and the 20 pound diaper bag), but he was going crazy in the carrier and wanted to be held in our arms instead, which was brutal on our backs and arms.

After that, we started bringing the stroller and then putting the diaper bag inside of it when he was being carried. That was definitely a winning solution. He liked the stroller better when we were away from the crowds, but once we got in the convention center, he wanted to be carried. We were even able to suspend the diaper bag from the stroller’s handles when he was in it so we could avoid carrying it all day.

Pack as Light as Possible (It will Still be Heavy)

Taking a baby somewhere like Comic Con, you’re going to need lots of diapers and wipes, plus you’ll probably want antibacterial gel or wipes, water, toys, snacks, an extra tee shirt, an extra outfit for the baby, something to keep the baby warm in the evening and more. We kept slimming down the bag throughout the weekend, but everything that stayed in there we needed and the bag still seemed to weigh at least 20 pounds.

Take Advantage of the Shuttles

They go all over downtown and they can save your feet and, if you’re carrying a baby that’s done sitting in the stroller, your back. Since we were driving, they also ended up being a lifesaver since Rigby hates riding in his car seat. If he woke up before we found parking, we’d just go somewhere a little far from the Convention Center, but near a shuttle route and look for parking there. 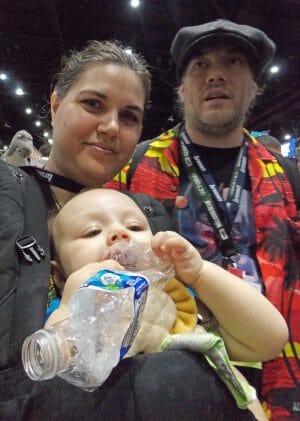 Toys only went so far to keep little dude amused on the floor, but one thing he enjoyed consistently over the whole weekend? Water bottles. He loves the crinkly noise they make. And because he’s able to drink out of them with a little parental guidance, it was also a great way to make sure he stayed hydrated over the very hot, very long weekend.

We Don’t Need No Stinking Badges

I did a little research before we left and found that even though anyone under 13 can go to Comic Con for free, they still need a badge. Since my husband had to pick his badge up in person, we were able to get little Rigby’s badge printed at the same time. That being said, it turns out that if you have a kiddo under walking age, they don’t actually need a badge. The kid’s badges are mostly there to make sure that when children get lost, their parent’s contact information is easily accessible so they can be found easily. I saw security guards check that kids had badges, but not once did they ask about Rigby’s badge and I noticed most other babies didn’t have a badge of their own at all.

Even so, I’m glad we got him a badge as it’s something that’s definitely going in the baby book.

Not Getting to Crawl Was the Hardest on Him

Before we left, my husband kept warning me not to “kill our son” just so I could have a good Comic Con and telling me that we should plan on leaving and coming home to give him naps. As the person who takes him out more frequently, I kept reassuring him that Rigby would be fine and that he naps all the time in his carrier and in the stroller. And I was right, he slept pretty well while we were out.

In fact, his sleeping pattern was thrown off a lot less than his eating schedule since Rigby insisted on living off a diet of cereal in the morning and Cheerios and tomatoes while we were out with plenty of breastfeeding in between. (It’s worth noting that Comic Con offers nursing mother stations that provide a secluded, semi-quiet place to feed your baby and that they are greatly appreciated by those of us who use them.)

Even with his diet all thrown out of whack though, Rigby was in pretty good spirits and charmed the pants off of everyone he saw. In fact, the only thing that really seemed to bother him about departing from his usual routine was being carried or pushed in a stroller all weekend. He just wanted to crawl and, unfortunately, there just weren’t many places in the immediate vicinity where he could. I think his favorite parts of the weekend were those where we let him cruise around on the grass outside. Rigby wasn’t particularly thrilled to be unable to crawl most of the weekend, but the rhythmic feeling of motion from the stroller and carrier helped calm him and seeing new people and things stimulated him. Without motion and new things to look at though, he got really fussy, really fast, even with a new toy from the convention floor -so that meant avoiding lines whenever possible.

Unfortunately, that meant missing out on 90% of things you normally do at a convention. In fact, I never noticed how much of Comic Con involves standing in line. Even if you avoid the obvious lines related to panels, giveaways and autograph signings, there are lines to take pictures at booths, to buy things, to go to the masquerade party, to use the bathroom, even to cross the street.

In the end, I feel like we missed out on most of the convention simply because we didn’t want to make our son wait in lines.

That being said, it’s worth keeping your eyes out and paying attention to what’s going on around you. My husband got an autograph from the artist Skinner when we saw him behind the Convention Center and we got to meet and chat with Fantastic Beasts actor Dan Fogler at the Heavy Metal booth because no one noticed him selling his comic book (although Rigby was unimpressed by the whole thing).

A Lot of Things That Should be All Ages Aren’t 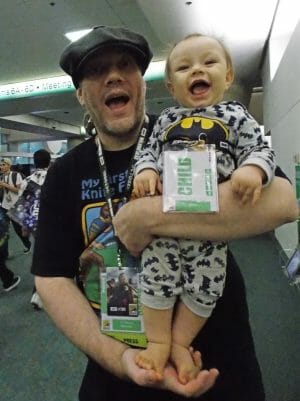 We already knew we’d be skipping parties with a baby on board, but it’s surprising just how many things are 18 and up, if not 21 and up. For example, many get-togethers were 21 and up even though they were at restaurants that happened to have bars. “The Experience” at the Petco Park parking lot had a VIP area we had access to as press, but it was inexplicably 21 and up despite having nothing more than a little catering area on one side that served beer and win. And even the Adult Swim Summer Camp was 21 and up. As a result, practically everything was off limits for us to do outside of the convention -except things that had massive lines.

We always get to the con late, even before we had a baby. When you arrive at 3 and the floor closes at 7, it’s only natural to want to stay until the exhibit hall is closed. Fortunately, we are familiar with how crazy the restaurants get at 7, so we made a point of leaving early. I was worried we still would be stuck waiting for a table, but as long as we left at least half an hour early, we were fine. You could tell when the hall closed by how many people suddenly showed up at the receptionist stand.

It was a great experience having our first meal out with our baby at the Cheesecake Factory and all it took was about four straws, three toys, 20 Cheerios, two teething biscuits, a teether, a sippy cup, five tiny pieces of bread and 15 tiny slices of tomatoes to keep him entertained. That never would have happened if we had to wait for a table. Of course, he wasn’t actually interested in eating any of his baby food, but hey, he didn’t cry the whole time and that’s what matters.

I look forward to going to the convention next year and getting to do more of the things I like doing (particularly going to a few parties while Rigby stays with a babysitter). But even though I felt like the actual con part of my experience this year was a bit of a bust, the weekend as a whole was great. It was nice getting to spend the whole time with my family. I wouldn’t trade anything for my time watching my son crawl around in the grass, sharing lunch with us before the convention, sitting in a highchair for the first time, or grabbing his new toy unicorn and immediately shoving the horn in his mouth. I wouldn’t even give up those memories for a chance to meet John Barrowman or to do beer and wine tasting with Neil DeGrasse Tyson (both things I missed out on this year).

I Can’t Wait to do it Again Next Year

Carrying a baby around all weekend was tough and my back is still killing me, but it was a heck of a lot easier than going while pregnant last year and feeling horrible sciatica pain down my back and leg with every step I took. Sure it was hard to have the baby in tow and next year we’ll have to wrangle him as he toddles around the floor trying to play with collectables that cost more than I earn in a week, but it will be endearing and memorable just like this year. Plus, we’re already in agreement that we’ll have a babysitter next year, so that should help.

As for going with another baby that can’t yet walk, I would still do it again and if you’re considering whether you should take your infant to a con, I say go for it. If you value your back though, just maybe go for a day or two -not four days straight.

I’m curious what you other geeky parents might think though. If you’ve taken your baby to a con, do you have any advice of your own to help parents keep their sanity? Great article.  Good information for anyone trying to decide whether to take or not to take baby.  When they are under 1 year, it’s nice to do it as a family.  Enjoy your memories! 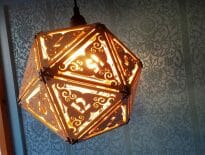 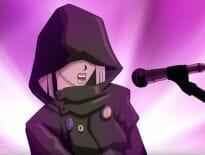