A blast tore through Lebanon’s capital city of Beirut last week, it was so strong that it reduced the struggling city’s docks to rubble.

Since then the entire government has resigned, in apparent recognition of the corruption and failures that led to a vast stockpile of ammonium nitrate being left in a dangerous condition.

It’s another humanitarian crisis. The tabletop gaming industry does not have crisis fatigue. We’ve already seen a bundle on Itch.io for the Lebanese Red Cross, and now, led by AAW Games there’s a Bundle for Beirut.

There’s a treasure trove of RPG goodies in the bundle; including Sherwood: The Legend of Robin Hood for Pathfinder, The Rhune: Dawn of Twilight Campaign Guide, the Modern AGE adventure Five and Infinity: Chapter 1 – Hunting Night and the Cthulhu mythos Whispers in the Dark: Quickstart Rules for 5e.

Here are the publishers helping out;

100% of proceeds go to Doctors Without Borders, and you can grab the bundle, for a limited time, from DriveThruRPG. 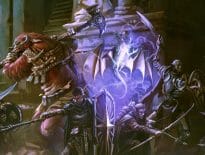