Zak Smith is an artist who had his name purged from Dungeons & Dragons after Wizards of the Coast accepted allegations of sexual abuse made against him.

WotC was not alone in taking action, DriveThruRPG banned all future Zak S games, including those to which he contributes too.

Now, a year later, James Raggi, the owner of Lamentations of the Flame Princess, has allowed Smith into the official Facebook group for the RPG and has banned any discussion of Smith’s history. The ruling came with a warning that dissenters could be banned from the group.

In the same post, Raggi conceded that he had received numerous “very concerned” emails for sheltering Smith and that one project, years in the making, had been lost.

Previously, as the allegations against Zak Smith mounted, Raggi had taken to Facebook to tell fans of the game that all future work with the designer had been cancelled. However, at the end of the announcement, he added a personal note to say that he was crushed that he could not continue to collaborate.

Kiel Chenier, the author, has disowned the book and regrets writing it. Chenier stresses that they stopped working entirely for Lamentation of the Flame Princess after the publisher used the controversial Jordan Peterson to promote the company.

There’s no suggestion that Lamentations of the Flame Princess is paying Zack Smith for consultancy or involving him on game projects. 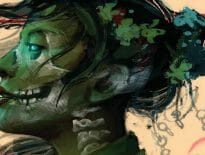