Yesterday at PAX East, Larian Studios gave a gameplay demo. We also got access to their opening cinematic.

The mind flayers have rediscovered their flying Astral Plane travelling Nautiloids. These tentacled ships are powerful enough for them to launch an invasion, starting with a kidnapping run on Baldur’s Gate, grabbing people from the streets so they can become hosts to the next generation of mind flayers.

How do you get a new generation of mind flayers? Horrible little tadpole spawn which wriggle in through the eyes of victims and possesses their minds.

That’s when the Githyanki appears. Three of them, and on the backs of red dragons, sweep in from a portal and all of a sudden the mind flayer turns from the hunter to the hunted.

The former slaves of the illithids give chase and eventually bring down the Nautiloid.

In the game, your character is one of the kidnapped victims who, thanks to the Githyanki intervention, is now free… but you still have that tadpole in your brain which is working to turn you into an illithid.

As is Larian’s way, Baldur’s Gate 3 will appear on Early Access before a wider release. That means they’ll have lots of players helping to iron out the kinks in a complicated and option filled world.

There will be 15 races to pick from and eight classes. Some of the characters you can select are special origin characters – they’re pre-genned, but the game will have scenes and plots for their backgrounds.

Larian confirmed some of the classes you can assign to a custom character.

They also mentioned some of the races you will be able to select.

No matter who you are, your character will hail from Baldur’s Gate 3. You’ll have some skin in the game when it comes to the fate of the city.

Baldur’s Gate 3 has been announced for Google Stadia and PC. Early access is expected, but not promised, for this year.

Details sourced from Fraser Brown’s coverage at PC Gamer (and ) and Jason Wilson’s at Venture Beat. 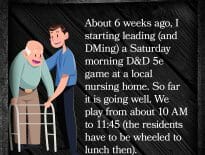