You are here: Home / Games / Tabletop & RPGs / Wizards of the Coast: The future of D&D is digital

Two weeks ago, during Hasbro’s Investors call, they teased they would be sharing some news about the future of D&D and how the toy giant would double the money made from the tabletop brand.

That announcement was last night.

The D&D, Magic: The Gathering and all-around Hasbro updates came during the London Toy Fair, and they’ve not really made headlines across the tabletop gaming community. No significant changes are coming, not that were announced yesterday.

In fact, the biggest surprise I had was the stat Wizards of the Coast’s President Chris Cocks cited that claimed 65% of RPG fans are aware of Dungeons & Dragons.

Only 65%? I suppose if the source sample includes computer game players from non-English speaking territories, then maybe … but no. I think that’s a lowball number. It’s a potential business risk too as it vastly overstates the possible untapped awareness audience.

We’ll get a new D&D every year, in fact, on the current release schedule.

Hasbro also announced a newsroom section of their website and the Toy Fair presentation is online, so let’s walk through some of the slides.

Let’s start at the top (except for the two slides already shown) and work through in order.

The first look at D&D appearing in a Hasbro slide is alongside Magic: The Gathering in the Gaming Category. It’s a mobile phone D&D game, and it turns out this is both speculation and foreshadowing. We don’t know what the new D&D computer games are, but one of them is undoubtedly a smartphone game.

The next significant appearance of either Magic: The Gathering or Dungeons & Dragons is equally important in terms of spelling out where Hasbro wants to go. These are the brands Hasbro is focusing their ambition.

Where might we see this ambition realised? In streaming, in TV and cinema and in digital. Wizards of the Coast’s newly announced Greenlight Fund offers up a million dollars to potential streaming partners.

How a brand sees itself structured and the world around it is often telling. Can you think of a Hasbro location game? Something like Ingress or Pokemon Go? I must admit; I can’t. Yet, there it is, on top of the brand blueprint.

I think it might also be significant that eSports gets such a prominent mention too. Right now that would be Magic: The Gathering but are Hasbro hoping D&D could (or should?) do something in that space?

When Hasbro takes the chance to remind the room of its hero brands, it does not show both D&D and Magic: The Gathering. They show a character that can represent both. Later on, this same spellcaster is used to represent Chris Cocks in the presentation.

Okay, this isn’t D&D or Magic: The Gathering specific at all but I’m calling it out anyway. Hasbro Pulse is the company’s alternative to Kickstarter.

Remember the drama around the ‘surprise’ announcement of Explorer’s Guide to Wildemount?

Some fans threw their hands up in the air and moaned they weren’t getting a new and exciting setting that felt different to The Forgotten Realms. WotC could try and gauge the crowd, in the future, by running crowdfunding options for future books. If the community funds both a Dark Sun and another Critical Role book then WotC can produce both safely.

Over 8,000 people pledged to fund that giant Unicron Transformer shown on the slide.

This is an ecommerce slide and already a cliche in some circles. Yes, it’s essential to recognise that smart speakers are a thing, and some people are buying stuff through with voice. Should that be a focus for Hasbro? I doubt it.

However, Paizo does have a Starfinder game for Alexa and this feels much more like an area Hasbro and Wizards of the Coast need to explore.

Investors liked Hasbro’s earnings call two weeks ago, and the stock price of the company rose. It fell straight back down again when the company pointed out how many of their products would be hit by closing factories in China. It is the impact of Corvid-19. Hasbro is exposed.

Last year, Hasbro was also caught in the American / China trade war. No surprise to see that they’re telling investors at the start of 2020 that they want to reduce their Chinese exposure.

They’re not saying Transformers models will be built in the States. They say, instead, improving their supply chain. That’s probably code for building a robust and global network of factories and logistics.

D&D and other titles are also publishing titles. See, it’s not all computer games and models.

The D&D book featured here is D&D cartoon advert for Brazil? Hasbro does, and like it. It’s a reminder that by being a pop culture success they can license the use of their IP and earn money that way.

We’re into WotC’s section of the presentation here. It’s going to be a tough year to follow.

In fairness, though, buying two computer game studios in less than 12 months is pretty impressive and, yeah, transformative.

We’ll just have to see whether the internal Wizards of the Coast and Hasbro corporate structure and support these new assets.

Wizards of the Coast aspire to be a/the leading fantasy game publisher in any platform. By definition, this includes mobile, PC and console. The definition of “fantasy” is less clear, though. No sci-fi?

WPN is the Wizards Play Network.

The player net promoter score means that an impressive chunk of Magic: The Gathering fans think the game is good, WotC is doing well and would recommend getting involved to their friends.

You can see that these players are also putting their money where their mouth is. They’ve been spending more.

Average Revenue Per User (arpu) is healthy enough to appear on this “driver” slide, but then pretty much everything appears on this slide. The digital version of Magic: The Gathering is a driver, and new ideas with the tabletop card game is also a driver.

If everything you can already do with Magic: The Gathering is a driver… when where is more growth going to come from?

I hadn’t actually understood that WotC was behind in China. Will Magic: The Gathering take any market share there? It’s certainly not impossible, and success will certainly be profitable for Hasbro.

I’m glad Spellslingers seems to be doing okay. It reminds us that even with M:tG that innovation and new ideas can be mobile-first, not collectable card game first.

Hurray! Dungeons & Dragons have had a great year. I think the picture chosen for this slide is lovely too; an honest reflection of the diverse D&D community.

WotC is spot on too – D&D does span generations. How to make money from that?

And at this point we’re back to the two slides this post opened with; the future for D&D is computer games.

Now, let’s take that with a pinch of salt. While this presentation did happen at the London Toy Fair, I think the intended audience was corporate. Gamers don’t care about Chinese betas, average revenue per user or net promoter score calculations.

That means there might be gamer interest news coming. Wizards of the Coast may yet talk to us about plans for D&D’s tabletop gaming future now they’ve helped their parent manage the corporate communication responsibility for the year.

Equally, investors don’t care about a hardback that costs many thousands to make. They care about a computer game that completes with the multi-millions of triple AAA titles.

A computer game a year for seven years will absolutely influence the tabletop future. Baldur’s Gate III and the TTRPG’s Descent into Avernus are connected.

With Dark Alliance coming out after that, a game which features The Forgotten Realm’s Drizzt, there’s no chance WotC would pick that precise moment to encourage the fan base away from The Forgotten Realms. It’s much more likely we’ll get Underdark expansions.

What do you make of the London Toy Fair announcements? Are these the big decisions Hasbro should be making for Magic and D&D? Is this where the money should go.

Wizards of the Coast: The future of D&D is digital 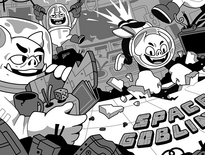