March’s mystery D&D book has yet to be revealed by Wizards of the Coast, but that has not stopped the information leaking from book shops and eCommerce sites.

Yesterday, Amazon’s page let us know the book would be called Explorer’s Guide to Wildemount.

Today, Barnes & Noble has shown us the cover illustration. Of course, this has yet to be confirmed by WotC, but it seems unlikely Barnes & Nobile would invent their own cover.

Wildemount is a name familiar to fans of the D&D podcast & stream Critical Role. It’s part of Tal’Dorei, although separated from the main content by the Shearing Channel.

Matthew Mercer, Critical Role’s popular DM, is a contributor to the Explorer’s Guide to Wildemount. It’s his world, after all, and the official blurb of the book promises some exclusive Tal’Dorei reveals.

Barnes & Noble’s current retail page gives nothing more away, other than a recommended retail price of US$49.95 which they’re discounting by 30% to $34.97.

Explorer’s Guide to Wildemount will not be Mercer’s first D&D book. In 2017, he co-wrote Critical Role: Tal’dorei Campaign Setting which was published by Green Ronin. 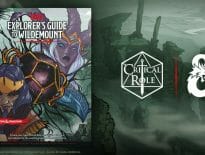