Despite efforts to stop the next official Dungeons & Dragons’ official sourcebook leaking ahead of schedule; the name has leaked, in the usual way with an Amazon listing revealing the title.

The book formerly known as “Dungeons & Dragons March Release Book (Title announced January 9th)” was not revealed on Thursday the 9th. Wizards of the Coast announced a delay until Monday the 13th.

It must be frustrating for Wizards of the Coast’s marketing team not to be able to control their own announcements.

Still, the attention fans pay is the result of loyalty and dedication the community gives D&D. That’s no bad thing.

Wildemount is a continent on Exandria. That’s the setting of the hugely popular D&D live stream Critical Role.

If you look at the map of Tal’Dorei, Wildemount is the landmass in the North-East corner, on the other side of the Shearing Channel, it is also the setting of the second Critical Role campaign.

Matthew Mercer, the Critical Role DM, is credited as a contributor to the book. The blurb on Amazon suggests that Explorer’s Guide to Wildemount will contain whole new secrets and their reveals.

The sourcebook will have new character options, help for DMs running in Wildemount and four different starting adventures.

Extra rules bring in new subclasses, spells, magic items and monsters all appropriate to adventures of Exandria. Vestiges of Divergence and Dunamancy are mentioned.

Update, 13th Jan: We now have a leaked cover illustration for the book.

Is this the book you were expecting? Are you pleased by the reveal? 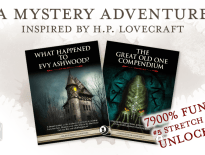 Tabletop & RPGs “What happened to Evy Ashwood?” is a L…