If you are looking to GM for the very first time or just looking for a new table top RPG to run, you can try out Mutant: Year Zero using just a free PDF and some spare six-sided dice you scavenge from board games. You can also check out the first few chapters as a free PDF preview. The system is both easy to learn and easy to run.

Nelma also has a skill, Move 1. In this case, she gets to roll 1 skill die (red in this example) with her 3 base dice trying to get a 6 to succeed.

Finally, Nelma is using a rope tied to the top of the building. The GM rules the rope gives Nelma gets 2 gear dice (green) when using the rope.

Nelma will roll 3 blue basic dice, 1 red skill die, and 2 green gear dice to try to climb the building. With six dice, Nelma has a 67% chance of rolling one 6.

Nelma rolls and gets a 3 on all three blue basic dice, 1 on the red skill die, and both green gear dice come up a 1. Nelma fails.

However, she can push her roll, and her chance of success goes up to 87%. Nelma keeps any blue basic dice and green gear dice that rolled a 1 (in this case both her green dice stay a 1) and re-rolls the other dice. With the re-roll she now has rolled a 4 on each of the three blue basic dice, a 6 on the red skill die, and the original 1 and 1 on both the green gear dice. She succeeds!

The gamemaster or the player describes what happens based on how the dice rolled. The GM informs Nelma that as she shimmies up the rope she can see from her climbing experience it is badly frayed. Nelma makes sure she also has a hand on a ledge or a window sill. She clambers to the top of the building as the rope breaks and falls away. The rope broke because Nelma both rolled a 1 and a 1 for both green gear dice for the rope, so it broke, and she pushed the roll. If Nelma had rolled a 1 on a blue basic die she also would have temporarily lost 1 point of Agility perhaps as she strained himself completing the climb. She succeeded because of her skill in climbing.

Look at page Enforcer IV (paper page 52) in the starter booklet. For Nelma, distribute 14 points to her four attributes to give her Strength 5, Agility 4, Wits 3, and Empathy 2. Divide 10 points into Fight (Strength) 2, Intimidate (Strength) 2, Move (Agility) 2, Shoot (Agility) 2, Scout 1 (Wits), and Heal 1 (Empathy). For each attribute, the number shows how many blue basic dice to roll. Each skill shows how many red skill dice are added to the basic blue dice for the listed attribute.

Try out using the skills Intimidate (Strength), Move (Agility), Scout (Wits), and Heal (Empathy). Roll a number of basic dice equal to the attribute. If the skill has any number listed also roll that many skill dice. See how often you succeed.

Also, push some failed rolls. Remember to keep any 1s you roll on the basic dice and temporarily lower that attribute. Roll that skill again but use the lowered attribute.

Once you have the use of attributes and skills down, you are almost ready to take the rules for a test drive. Go to page II (paper page 2) and give Nelma a scrap spear and a scrap pistol. At the start of a fight, she rolls a six-sided die and so does her foe with the higher roll going first (re-roll ties). Each combatant gets one move (enough to get across a room or from one room to another) and one action such as using skills.

If Nelma wants to stab with the spear, she rolls Strength 5 (basic dice) plus Fight 2 (skill dice) plus Gear 1 (gear die). She can stab someone within a couple of meters rolling 5 blue basic dice, 2 red skill dice, and 1 green gear die. The first success does 1 damage, and any extra 6s do an extra point of damage. A foe with armor rolls that number of dice and subtracts any 6s rolled from the damage. The damage that gets through reduces the foe’s Strength by an equal amount. At Strength 0, a combatant is out of the fight.

When firing her scrap pistol, Nelma uses Agility 4 and Shoot 2 along with Gear 1. She can shoot someone she can see across a room or in an adjacent room.

If Nelma pushes an attack with her spear or pistol and the Gear die comes up a 1, the weapon is broken. For these practice combats, she has to switch weapons as a move.

Turn to page Enforcer II (paper page 50). Using step 6, roll a random mutation for Nelma. She starts with one Mutation Point and every time she pushes a roll and damages an attribute (each 1 on a basic die rolled when pushing the roll) she gains another mutation point.

Every time Nelma uses a mutation, it works automatically, unlike a skill. She still rolls a number of base dice equal to the number of mutation points she spends. If she rolls a 1, she must roll on the mutation misfire table on page II (page 2). If she rolls a 1 again, she lowers one attribute of her choice by 1 permanently but rolls for another mutation. Her mutations slowly eat her alive and may eventually consume her and kill her.

Turn to page 20 (paper page 22) and have Nelma fight the slave Henny with her scrap spear. Then heal her up and have her fight a gun battle with the stalker Krin. Their weapons are found on page II (page 2). Remember to roll a die for each side to see who goes first. Use a couple of index cards or paper scraps to represent two or three rooms, each of which takes a move to reach. Henny must also move right next to Nelma to attack as another move, but Nelma with her spear can attack him just by being in the same room.

Krin’s Rot-Eater mutation isn’t usable in combat, but Henny can use Four-Armed (see page Enforcer II, page 50 for the PDF) with one mutation point to get an extra attack. Lead with this mutation.

When you feel comfortable with combat, invite two or three friends to try combat and then an event. Have the players create an enforcer, gearhead, and stalker by assigning 14 points to attributes (maximum 4) and 10 to skills following the rules each playbook. Have the PCs encounter the wolf on page 20 (paper page 22) under Events. Read the description for Starting Scene on page 25 (page 27).

For this practice run, if any PC is broken (any attribute goes to 0) they cannot move or do an action accept try to Heal themselves. If they fail, another PC may try to Heal them. Number of successes is the amount the attribute gains back up to the starting maximum. Make a note of anything that happens that you aren’t sure how to run. Make a decision and get the PCs input. You can later go deeper into the rules to see if that situation is addressed.

After that, have the PCs explore three sectors of the Zone. Roll up three random threats using the table starting on page 7 (paper page 9). Roll for the type of environment on page 6 (page 8). If any of the environments indicate an artifact might be present, and the PCs overcome the threat, roll for a random artifact on page 9 (page 11). Have each PC find Scrap in a Zone by rolling on the Scrap table on page 10 (page 12). For each roll, roll two or three dice and read each number in order (615 for example).

When you are ready for more detailed rules, turn back to page Enforcer II (paper page 50) and read the Condensed Rules section and the other rules for the playbook. Add in a new rule or two based on what interests you until you learn all the rules. You might start by letting the PCs add the rules for their, start using the full healing rules, or add experience points so PCs can improve. Continue to play through more random threats and the events in the included adventures.

These rules scratch the surface of what you can experience during the end of days in Mutant: Year Zero. Grab some six-sided dice and the PDF to learn the basics. Then invite some friends to play a table top RPG with you, whether you are an experienced GM or brand new. If you like the free PDF you can add on with the Mutant Year Zero RPG (PDF) or more recently the Mutant Year Zero Elysium RPG (PDF). 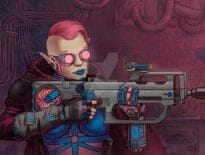 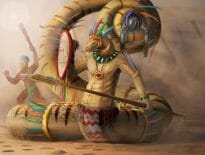 Geek Stuff Non-gamer accidentally applies to College claiming…
💰 Copper Coins 💰 Geek Native is an affiliate and may earn commission on purchases you make from third-party sites.
🍪 Privacy & Cookies 🍪 The site uses cookies to survive. By accessing the site, you agree to use your browser to control cookie use or take 1d4-3 privacy damage (tracking). If you defeat cookies via ad blocking, please consider the Patreon. An intro to cookies, and how to control them, can be found here. I Manage Cookies