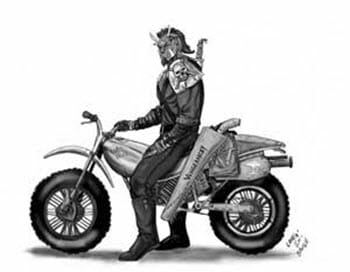 Almost reclining in the seat of his souped-up car, which was covered in a layer of grease from the grimy oil churning in its engine, the road warrior glared out through the narrowed slits of his eyes at the roadway ahead. The rough and ragged cement of the open road was winding and whipping with each curve like a snake gone berserk, but his practiced hands moved calmly and smoothly over the wheel despite the erratic maneuvers required just to say on the road.

Behind him, however, the enemy was catching up. Mounted on cycles and driving stripped-down dune buggies and trucks with beds converted to mount vehicular crossbows, the raider gang rode in hot pursuit. While it was true he had slipped unseen into their camp the night before to relieve the raider scum of their precious gas supply, he consoled himself with the knowledge that that very same juice had no doubt been ripped from the hands of murdered innocents by those same pursuing raiders.

One of the buggies on his tail failed to take the turn and ran straight off the road, plunging clear into a gorge of dizzying depth from which there was no return. He could hear the occupants screaming as they plummeted to their deaths a hundred or so feet below.

The Road Warrior is a member of a unique breed that roams the vast plains and desert wastes of the Twisted Earth, obeying no law, serving no community, and scavenging the things he needs from the abandoned husks of trucks, cars, and other vehicles along the Ancient American road. The Road Warrior subsists, not unlike the Scav, on the rare junk he finds, but his primary concern is not food for his stomach or water to sate his thirst, but fuel to power his “ride.”

The Road Warrior seeks the solitary life and the freedom of the open road. The highways of the Twisted Earth are fraught with peril, as roving bands of raiders seek to dominate territory and raid supply convoys, but the Road Warrior is prepared to deal with this. He is a man who has become reliant on his vehicle for survival in the empty, desolate world, and this very reliance has made him an expert at fighting from the back of his ride as well as defending himself from the attacks of motorized brigands and warlord armies that terrorize the roads and deserts of the wastelands.

To qualify to become a Road Warrior, a character must fulfill the following criteria.

The following information pertains to the Road Warrior advanced class.

Action Points: 6 + one-half of the character’s level, rounded down, every time he or she attains a new level in this class.

The following features pertain to the Road Warrior advanced class.

Damage Threshold: The Road Warrior increases his massive damage threshold by 3 points. This increase stacks with the increase provided by the Improved Damage Threshold feat.

Boarding Party: A Road Warrior can leap from one vehicle to another, even at high speeds. The Road Warrior gains a +4 competence bonus to Balance, Jump, and Climb checks when attempting acrobatic maneuvers during boarding attempts.

Offensive Driving: Using 1 action point, the Road Warrior can operate a vehicle as a free action. This allows him to take a full-round action with his free hand, including firing a one-handed ranged weapon.

Improved Sideswipe: The Road warrior is an expert at causing other drivers to lose control of their vehicles. Upon a successful sideswipe, the target suffers a –4 to their Drive check (to retain control).

A figure slips quietly through a field of junked automobiles and heaps of rancid garbage, the scene picked clean by vibrant purple vultures and buzzing insects. She moves almost soundlessly, the only noise coming from the rattling oilcans and greasy trinkets dangling from her belt and overstuffed pack. She keeps a weird gun slung over one shoulder, her hands free to snap out and grab something—anything—from the piles of trash. She paints her face like a skull, so that those who first see her feel fear rather than pity. 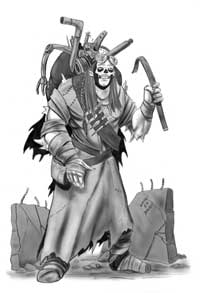 “Scav” is a derogatory term used widely throughout the wastelands to refer to the misfits, outcasts, and mongrel wanderers of the deserts and ruins. Scavs are “scavengers” in the truest sense, making do with the smallest amount of supplies for long periods of time. She moves alone, exploring the ruins, deserts, and wilderness in search of the next “mother-lode” of lost goods or discarded junk. Many Scavs are like old-time prospectors, following fantastic tales of Ancient storehouses lost in the sands or forgotten cities untouched by the hand of time. More often than not, she is just a wormy little creature picking over the refuse of other communities or the dead bodies of raider prey strewn across the sand.

The Scav is a shrewd opportunist, always picking her fights, watching her opponents from afar before ever getting herself involved. Life as a loner is not an easy one, but no one survives by being a fool. Trust is a luxury, and the Scav knows nothing of luxuries. While she often describes herself as an adventurer and pioneer, a Scav is also like a vulture, waiting and watching for the right opportunity to strike. Scavs are notorious for shadowing caravans or other groups moving through the deserts or ruins, knowing full well the dangers the caravan faces. Once the bandits or mutants have attacked, the Scav moves in to take what she can before scampering off into the darkness.

Scavs are those who have survived all their lives on their own, scrounging and scavenging in the wastes, walking and sleeping among the ruins of mankind’s past. Such characters usually never knew their parents, and though they may have had contact with other people in the past, they never stayed very long; in most cases, the men or women who gave them shelter were killed by desert raiders or mutant scum. The Scav is tough, having relied on her own wits and willpower to endure the heat, radiation, and creatures of post-apocalyptic Earth. Although she is equipped with only the junk and refuse of civilizations past (she cannot usually benefit from the makeshift inventions of the various communities, for she is perpetually viewed as an outsider), she knows well the value of every little item, where it will be a valuable commodity, and what price she can fetch. She utilizes even the most mundane items, for she can find a use for anything—she has to survive.

Requirements
To qualify to become a Scav, a character must fulfill the following criteria.

The following information pertains to the Scav advanced class.

Action Points: 6 + one-half of the character’s level, rounded down.

The following features pertain to the Scav advanced class.

Bonus Feats: A Scav receives a bonus feat at 3rd, 6th, and 9th level. The feat must be selected from the following list, and the character must meet the prerequisites to select it: Acrobatic, Alertness, Armor Proficiency (light), Athletic, Attentive, Cautious, Defensive Martial Arts, Dodge, Elusive Target, Meticulous, Mobility, Nimble, Run, and Stealthy.

Scav Scan: This ability represents the Scav’s skill at searching or scanning an area for valuable artifacts or concealed passages leading to treasures troves of the Ancients. This ability can be used in one of two ways, either as a quick scan to find the most valuable Artifact, or as a sweeping detailed search, making sure nothing is missed.

Quick Scan: When performing a quick scan for concealed doors or passages, hidden items, or other valuable Artifacts, the Scav gets a +2 circumstance bonus to Search checks. The scan covers an area out to 30 feet away from the Scav (but not behind her). This ability uncovers everything that is detectable with the Scav’s skill check roll, all within a single round! Also, with a successful Knowledge (technology) check (DC 15), the Scav can quickly identify the most valuable items. Useful when a Scav has to flee!

Detailed Scan: When performing a detailed scan, the Scav is effectively taking 20 on a Search check, gaining a +4 circumstance bonus to the Search check and the ability to search a 30-foot by 30-foot area instead of the standard 5-foot by 5-foot area.

Scav Survival: The Scav has a knack for avoiding massive damage. A Scav can spend 1 action point to reduce the damage dealt by a single attack or effect by half her Survival skill (minimum 5 points).

Sneak Attack: The Scav is a stealthy, sneaky predator, often ambushing lone wanderers and straggling merchants. As such, she receives a damage bonus when her target is denied his Dexterity bonus or flanked. A Scav may sneak attack with a melee weapon or ranged weapon, as long as the enemy is within 30 feet.

Feign Death: A Scav is able to pass for just another dead body, a talent that is particularly useful in avoiding dangerous combats or encounters while out in the wild. A Scav using this ability is indistinguishable from a dead body. The effect lasts 10 rounds per level of the Scav.

This ability is often used in conjunction with Scav Survival, making it seem as if the Scav has been killed by a deadly attack.

Shadow In The Open: A Scav has the ability to literally blend in with her surroundings, enabling her to hide even in plain sight (provided she does not move). In addition, a Scav gains a +2 bonus to Hide and Move Silently checks when moving through desert, trash, or ruined terrain.