Funko has released more of their 2020 Dungeons & Dragons Pop range.

There’s a Boo (a miniature giant space hamster) and Minsc (mad ranger) Pop from Forgotten Realms, which many Baldur’s Gate computer game fans will remember. The pair appear elsewhere, and giant space hamsters are an actual D&D thing; used to power some ships in Spelljammer.

There’s also a Pop! Mind Flayer, a name made mainstream famous by Stranger Things even if the creature doesn’t match up, and a Pop! Asmodeus.

Asmodeus gets a mention in D&D campaign setting Descent into Avernus, being the ruler of all Devils and therefore the boss of Zariel of Avernus. 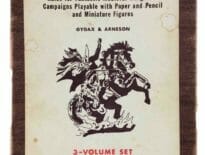 Sites Virtual tabletop Astral offers “free play we…
💰 Copper Coins 💰 Geek Native is an affiliate and may earn commission on purchases you make from third-party sites.
🍪 Privacy & Cookies 🍪 The site uses cookies to survive. By accessing the site, you agree to use your browser to control cookie use or take 1d4-3 privacy damage (tracking). If you defeat cookies via ad blocking, please consider the Patreon. An intro to cookies, and how to control them, can be found here. I Manage Cookies