You are here: Home / Games / Tabletop & RPGs / Kings of War march their RPG to Kickstarter

The campaign to bring the world an RPG based on Mantic’s popular wargame is on Kickstarter. The tabletop roleplaying game is being made by Red Scar publishing and will use their TriCore system.

The campaign launched a few hours ago with a request of £15,000. It’s already got nearly £3,500 in the bank from 70 or so backers. You can follow the progress via its campaign page.

Right now, most backers are going for the £60 option (that’s about $74) to secure the core rules in print and PDF, the GM screen, an A2 double-sided poster, dice, a name in the credits and stretch goals.

It’s £15 to get a PDF copy and £35 for the hardcover plus digital download.

Want to try before you pledge? There are options as Red Scar has two different Quickstarts up on DriveThruRPG;

Kings of War is set on the world of Pannithor, which was nearly destroyed in an ancient war. The surviving god-like beings from that war are decided into two; the good Shining Ones and the evil Wicked Ones.

The remains of the shattered world have seen little peace since then. Generations of war have seen empires come and go, gods sacrifice themselves, gateways to the underworld open and horrible creatures created to hunt man, dwarf and elf.

The campaign has add-ons that you can buy separately, like TriCore dice, as well as social stretch goals.

If you have the time here is nearly three hours of playtest material.

Kings of War march their RPG to Kickstarter 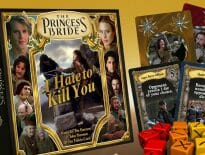 Tabletop & RPGs The Princess Bride game “I Hate to Kill You&… 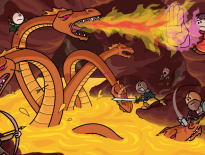