What is satire if not a marriage of civil disobedience to a laugh track, a potent brew of derision and lack of respect that acts as a nettle sting on the thin skin of the humourless?

The thickness of skin will surely be tested with Jaron R. M. Johnson’s Monsters of Murka for 5e. This Kickstarter has just launched, promising parody, political satire, bad puns and more as it takes a swipe at the Don. It’s asking for $12,000 and in the opening hour has nearly raised $1,000. You can follow the progress here.

Struggling to come to terms with politics in your country?

Monsters of Murka aims to combine the age-old pastime of tabletop gaming with the snark and wit of political cartoons. The campaign setting recreates the United States as a goofy, high-fantasy caricature of itself, including such locations as Sea-Addled (a sea-side town in the northwestern corner of Murka), Holly Woods (a land of fame and fortune nestled in the southwest), and Idolando (home to a mysterious, rodent-worshipping cult).

While the centrepiece of the parody is the Republican President of the United States, Monsters of Murka has authors and artists involved from all over the world; including Mexico, Canada, France and Indonesia.

I’ve invested all of my free time from the past year on this project, sure, but Monsters of Murka would not be possible if it weren’t for my brother, C.J. Thomas, who’s contributed some of the funniest ideas to the book. Additionally, our lead artistic team, Big Bann Studio, has done an incredible job of bringing these creatures to life.” 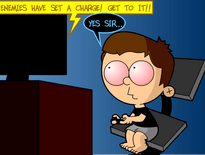 Geek Stuff Is gaming addiction a disease? The World Health Or… 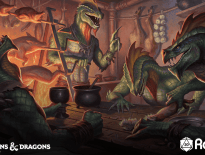